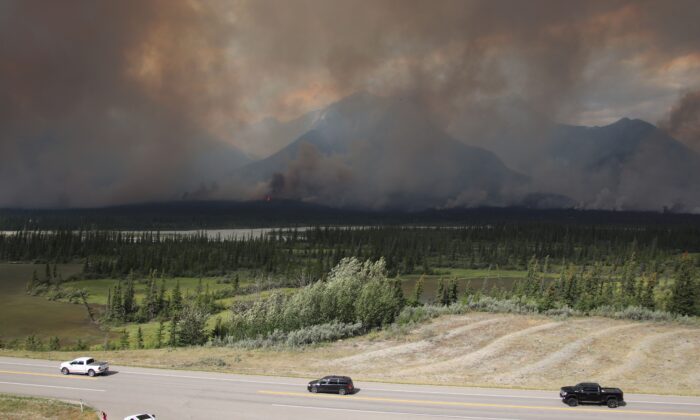 Thick smoke from the Chetamon Mountain wildfire near Jasper, Alberta, drifts across the region on Sept. 4, 2022. (Parks Canada)
Canada

‘Out of Control’ Wildfire Near Jasper in Alberta Spans Over 6,000 Hectares

A wildfire in Alberta’s Chetamon Mountain near Jasper has rapidly spread since declared out of control on Sept. 1 and now spans 6,150 hectares.

On Sept. 5, Parks Canada said the fire was spreading to Snake Indian Valley, and protecting critical infrastructure has been the top priority for the responders.

There has been no evacuation warning for the residents as yet, but the municipality of Jasper is facing power outages, which have impacted many non-essential community and tourism services including gas stations, food services, and grocery stores, according to Parks Canada.

At a meeting on Sept. 6, Jasper Mayor Richard Ireland said the wastewater treatment plant, water wells and the water treatment plant, traffic lights, the hospital, and the Jasper Activity Center had their power restored on Sept. 5. He said the municipality was working with ATCO to use generator power to rehabilitate the power supply to the rest of the community by the evening of Sept. 6.

Amanda Mattern, regional general manager of ATCO, said generator power is not as reliable as the power that usually comes from the Alberta grid, and advised locals to conserve their electricity to prevent blackouts and brownouts.

“We have confirmed damage to multiple transmission structures from the wildfire. The area has been deemed safe to enter and Parks Canada will be escorting my team to complete an evaluation of the damage,” Mattern said.

The fire only covered two hectares on Sept. 1 when it was first declared out of control, and two helicopters and three firefighting crews responded to try to contain the blaze.

On Sept. 2, Jasper National Park restricted activity at the Jasper airstrip, disallowing take-off and landing to enhance the safety of visitors and the public.

Jasper National Park closed Snaring and Celestine Lake Roads and the surrounding area, including both Snaring and Snaring Overflow Campgrounds, on Sept. 2. Wabasso Campground, Talbot Lake, and Talbot Lake Day Use area were closed on Sept.5. No power resulted in the park being unable to provide basic campground services.

As of Sept. 5, visitors were not being turned down to enter the park, but if they have flexible travel plans, they are advised to come back another day.

A Jasper National Park Facebook update stated rain and cooler temperatures on the evening of Sept. 5 helped firefighters and helicopters access priority areas of the fire; favourable weather conditions are expected to continue until Sept. 7. Without more rain, the fire is expected to intensify.