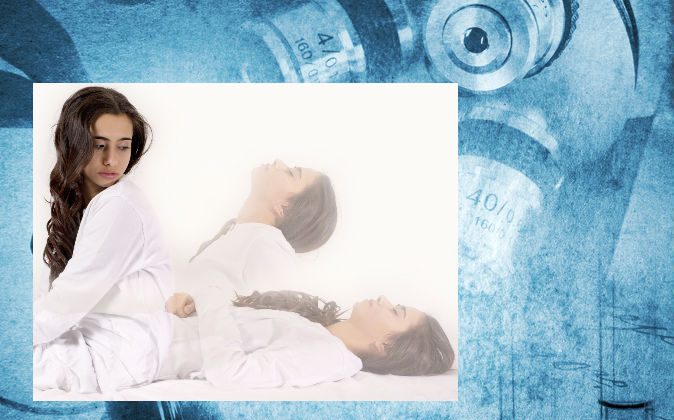 A concept image of an out-of-body experience. (Thinkstock; background image via Shutterstock*)
By Tara MacIsaac

New research is underway at Nottingham Trent University in the UK to further understand out-of-body experiences (OBEs). The research especially aims at getting a better idea of the varied forms of OBEs and the meanings they hold for the diverse people who have them.

An OBE is generally defined as an experience in which a person has the temporary sensation of being separated from his or her physical body. But the circumstances surrounding the experiences and the accompanying sensations vary.

Dr. David Wilde, a lecturer at Nottingham Trent University’s school of social sciences in the UK, said in a University news release: “The features that characterize the out-of-body experience are also quite rich and varied, but have been typically ignored in modern research in favor of a slimmed down set of ‘core’ characteristics.”

Dr. Wilde’s surveys are more detailed than those used in many previous studies and his study includes a process of weeding out “other similar hallucinatory experiences that could be mistaken for an out-of-body experience.” The online questionnaire closed on August 14, though there will be more rounds of data collection coming up.

Here’s a look at two other interesting studies that have been conducted on OBEs:

A file image of a brain, captured via MRI. (Shutterstock)

At the University of Ottawa in Canada, researchers conducted magnetic resonance imaging (MRI) on the brain of a woman during what is described in the published study as an “extra-corporeal experience.” They avoided the term “out-of-body experience,” because they felt this term includes an emotional agitation and some other characteristics not included in her experience.

This woman, a 24-year-old psychology graduate student, said she had been able to leave her body and interact with the outside world in an extra-corporeal form since childhood. Able to enter such a state at will, she did so while undergoing the MRI. The researchers, Andra M. Smith and Claude Messier, measured her brain activity during the experience.

Smith and Messier wrote: “The ECE [extra-corporeal experience] in the present study activated the left side of several areas associated with kinesthetic imagery and was associated with a strong deactivation of the visual cortex. This suggests that her experience really was a novel one, with a strong kinesthetic component. This was a healthy young woman with no brain abnormalities, thus providing a window into the brain during non-pathological, self-elicited ECE.”

They noted that this was the first study of a person who could have such an experience on demand and without any brain abnormalities.

More studies must be done to increase the statistical data related to these experiences, the authors noted, as this study focused on a single case. Interestingly, they also noted in their closing remarks that, “the ability might be present in infancy but … lost without regular practice.” Their study was published in the journal Frontiers in February.

Woman Leaves Her Body, Looks at Number on a Shelf, Reports Correctly

Dr. Charles Tart, professor emeritus of psychology at the University of California–Davis, performed one of the most famous studies on OBEs. He tested a woman, whom he referred to in the study as Miss Z, by placing a number on a shelf above the bed on which she slept. He watched her as she slept to insure she did not physically get up and look at the number.

The 5-digit number was randomly selected after she had gone to sleep, and it was brought into the room in an opaque envelope. Miss Z reported having left her body while lying on the bed and having floated up to look at the number. She correctly stated the number as it was written on the paper.

Dr. Tart and his collaborators tried to think of ways she may have done this without parapsychological means. The most plausible explanation wasn’t very plausible.

They thought the number may have been reflected on a clock face, the only reflective surface in the room. Dr. Tart and Dr. Arthur Hastings, whose help Dr. Tart had solicited, both tried lying on the bed under similarly dim lighting conditions. Neither could see any trace of the number on the clock face. Only when directly illuminating the clock face with a flashlight, increasing the brightness by an estimated factor between several hundred and several thousand times, could they “just make out what the number was.”

Miss Z was chosen for the experiment because she reported waking up multiple times nightly and finding herself floating near the ceiling, looking down at her body.

Dr. Tart described Miss Z thus: “My informal observations of her over a period of several months (undoubtedly distorted by the fact that one can never describe one’s friends objectively) resulted in a picture of a person who in some ways was quite mature and insightful, and in other ways so extremely disturbed psychologically that at times, when she lost control, she could possibly be diagnosed as schizophrenic.”

His study was published in the Journal of the American Society for Psychical Research in 1968.

*Concept image of science via Shutterstock