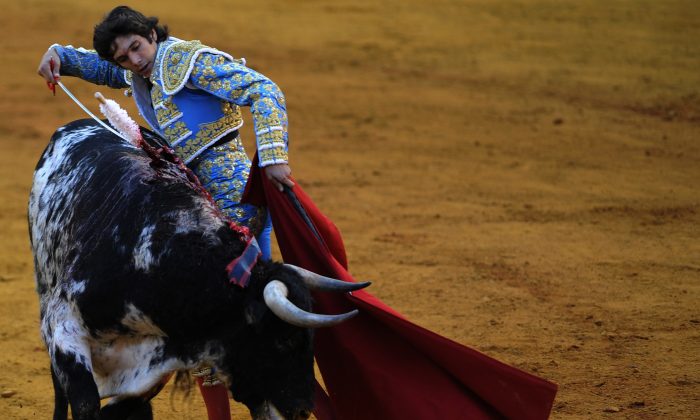 French matador Sebastian Castella performs a pass on a bull during a bullfight at the Maestranza bullring in Sevilla on Sept. 28, 2013. A debate has opened up in Spain about whether children should view bullfights on television, according to an Oct. 9, 2013 article in The Local. (Cristina Quicler/AFP/Getty Images)
International

A team of South African scientists and international collaborators has discovered the first evidence of a comet entering Earth’s atmosphere and exploding, “raining down a shock-wave of fire which obliterated every life form in its path”, Johannesburg’s Wits University announced on Tuesday. …

Spain’s children will still be able to sit down after school and watch a bullfight on TV after the Spanish Parliament decided on Tuesday it was OK to show such events during children’s viewing hours.

The decision comes after a parliamentary committee that oversees the operations of Spanish national broadcaster RTVE rejected a move to ban the showing of bullfights from 6pm to 10pm, or children’s viewing time. …

Three women are among the 55 richest people in Africa, according to Ventures magazine.

Of the 55, 20 are Nigerian, including several oil barons, while South Africa and Egypt boast nine and eight respectively. …

Employees at Sun Island Resort and Spa have accused its management of firing a large number of staff based solely on their political affiliation and suspected support for the Maldivian Democratic Party (MDP).

Sources from the resort allege that over 30 staff members have been fired following the announcement of the results of the first round of the presidential elections, held on September 7.

Sun Island is owned by resort tycoon and Jumhooree Party (JP) leader Gasim Ibrahim, who contested in the first round, finishing third with 24.07 percent of the vote. …

Maldives (A), an island nation in the Indian Ocean. (Google Maps)

Not far from the disaster zone, across the river that cuts through town, lies the future home of a commercial centre to replace Lac-Mégantic’s destroyed downtown.

Large chain stores — including Metro grocery store and Jean Coutu pharmacy, both irreparably damaged in the July 6 train disaster — are slated to move into the neighbourhood known as Fatima. In turn, it’s hoped smaller businesses will be encouraged to set up shop.

But to make room for the town’s new commercial centre, between 30 and 50 Fatima residents are now being forced out. …

PAPUA New Guinea has been given the nod to host the next APEC leaders’ summit in 2018.

It means hosting leaders like the presidents of the United States of America, China and Russia in the country.

Prime Minister Peter O’Neill said in a statement that the decision by the 21 APEC leaders to give the country the honour of hosting the 2018 leaders’ summit was a “tremendous vote of confidence in PNG as an independent nation and as a regional partner gaining greater standing and influence year by year”.

O’Neill said the 2013 APEC leaders’ summit in Bali, Indonesia, endorsed his nomination of PNG to host the summit in 2018. …

Time out: Basking in the sun outside his one-room cabin, Namgay Wangchuk looks like a waster at a glance.  But that’s until a buzzer goes off from inside the cabin.

Within seconds of the buzzer, Namgay throws on his apron, wears his gloves and gets to work.

The 25-year-old proprietor of the two-week old laundry, Tidy Wear Laundry, in Wangdicholing, Bumthang pulls out a blanket from the washer, throws it into a dryer, closes it and digs deep into a huge bag to replenish the washer. About 30 minutes later, the blanket is ready to deliver.

It is not a busy day and business is slow, but Namgay is optimistic it will pick up.

Two factors should help Namgay.  Winter is extremely cold in Bumthang to hand wash clothes, and there are lots of hotels resorts that would need laundry service. …