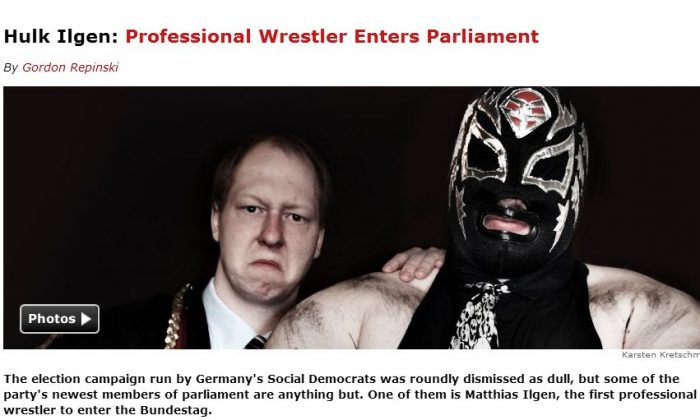 The election campaign run by Germany’s Social Democrats was roundly dismissed as dull, but some of the party’s newest members of parliament are anything but. One of them is Matthias Ilgen, the first professional wrestler to enter the Bundestag.

When professional wrestler Matthias Ilgen enters the ring as the “Baron of Ilgen,” it’s pretty clear where the audience’s sympathies lie. Hissed and spat at by onlookers, Ilgen plays the role of the bad guy. His competitor, meanwhile, enjoys the audience’s full support: When Ilgen takes a blow to the head, the audience breaks out in applause. When his competitor has him in a choke hold, the crowd goes wild.

But Ilgen is a different person outside of the ring. The 29-year-old, who comes from Husum — a northern German city close to the border with Denmark — will soon be entering the German parliament as a member of the center-leftSocial Democratic Party (SPD). …

In a country where political power is highly centralized in the national government, Venezuela’s December 8 municipal elections would seem to be unimportant. However, these will be the first elections after Nicolas Maduro’s contested election in April, and they will inevitably be interpreted as a referendum not only on “Chavismo without Chávez,” but on the opposition without Chávez.

Venezuela’s opposition, led by former presidential candidate Henrique Capriles, is strongest with the middle classes in Venezuela’s major urban centers. Chavismo, in turn, has overwhelming support in Venezuela’s towns and rural areas. This means that the government will likely win a larger number of municipalities. But the opposition theoretically has the chance to win the popular vote. …

Australia: Dirty nappies? You might be sitting on them

Today’s dirty nappies will be transformed into tomorrow’s park benches under an Australian-first recycling scheme.

A plant to open next year in Nowra will sterilise the waste and recover valuable materials for reuse in products ranging from outdoor furniture to paper and cardboard products and pet litter.

More than 450,000 tonnes of absorbent hygiene waste – disposable nappies, continence aids and sanitary pads – go to landfill each year in Australia, producing significant carbon emissions. Plastics, wood fibre and absorbent polymers worth more $120 million to industry are buried in NSW every year.
Recycling company Relivit will collect the waste, processing 30,000 tonnes a year in Nowra. It plans to expand to Melbourne in 2015 and nationwide by 2018. …

“Because it’s a country of contrasts: the theater director comes to work in a luxury S-Class Mercedes, but at the same time there’s no toilet paper, just old newspapers, in the toilets.”
—Janusz Józefowicz, a Polish choreographer and director of popular stage musicals, on why he likes to work in Russia

“Poland needs Bill Gates types, not dumbheads who just want to have a big house with a swimming pool.”
—Jarosław Kaczyński, leader of the conservative Law and Justice (PiS) party, criticizing Polish businessmen …

OTTAWA—That armoured tank in your rear-view mirror may be about to pop a wheelie.

The Canadian military plans to train more of its soldiers in rally sport driving, to help them chase bad guys.

“Canadian Forces personnel are required to operate both military and civilian vehicles in a variety of environments in Canada and abroad,” says a notice posted this week, calling for at least five top instructors from the private sector.

“Risks include not just hazardous road and traffic conditions, but local criminal and insurgent elements as well.” …

A ten-year-old boy who passed a Swiss final high school maths exam for fun is taking a special course in the subject at prestigious Zurich University, the institution said on Wednesday.

Maximilan Janisch, whose father is a retired maths professor, is the youngest child to ever be allowed to follow such a course at the university, its president Michael Hengartner told AFP. …

YOKOHAMA–Natsue Murata always helped people who were lost or needed assistance, so the sight of an elderly man lying face down on the tracks with a train bearing down on him spurred her into quick action on Oct. 1.

Murata, 40, got the man to safety just in time and saved his life, but she was killed when the train struck her, police said.

“My daughter was somebody who could not ignore a person in trouble,” said Shigehiro Murata, her 67-year-old father, who runs a real estate company. “I would like the man she saved to live to a very old age.” …