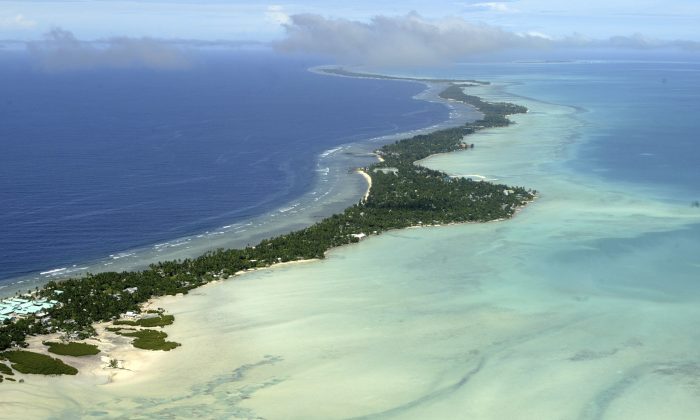 Tarawa atoll, Kiribati, is seen in an aerial view. A Kiribati family is applying for refugee status in New Zealand, saying they are fleeing climate change, which could wipe out low-lying Kiribati, reported the New Zealand Herald Oct. 2, 2013. (AP Photo/Richard Vogel, File)
International

A man from one of the lowest-lying nations on Earth is trying to convince New Zealand judges that he’s a refugee suffering not from persecution, but from climate change.

Lola Karimova’s recent BBC interview presents her in a better light than other members of her family, but her attempts to justify her luxurious Western lifestyle – arguably afforded by stealing money from her country – hardly invoke sympathy.

The Uzbek president’s two daughters – Gulnara and Lola – resemble two sisters from the well-known Russian fairy tale Morozko. The oldest, 41-year-old Gulnara, also known as GooGoosha, is definitely Marfusha, whose slew of corruption charges from several European countries has forced her to retreat back under her father’s roof for protection and wait for the cards she is dealt to decide her fate. Will she inherit her father’s throne or come up empty handed? …

A hamlet in the Ligurian Riviera hills is feting its first baby in 67 years, an arrival that has boosted its population to six.

Francesco was born last week to Michele and Sabrina Isella, a couple who said they moved to the tiny village of Lissa five years ago “because we love the woods around here”…

A world war could take place if the situation over budget issues in the US worsens, a Kuwait-based economist alerts.

According to Dr Hajjaj Bukhudoor, a Kuwaiti economic analyst, this is likely to happen since the US government officially entered a shutdown after a politically deadlocked Congress could not pass a bill to extend funding. US lawmakers worked late into the night but could not overcome a partisan split over President Barack Obama’s signature healthcare law. “With all this on the table right now, the worst case scenario would be a world war and total chaos in the world; it is very possible,” Bukhudoor noted.

He pointed out that a powerful country which is aiming to exit a recession needs a big thing (such as a war). …

One of the reasons for his concern is the influence US economy has on oil prices. Bukhudoor asserted that the US government shutdown will also affect oil prices and the income of oil-producing countries (OPEC). …

The government has gazetted a new regulation which allows security agents to access personal information through monitoring phone calls, emails and other communication technologies.

A government spy program will now monitor phone calls, text, email and the details will be kept in a national database for use on demand by the state security agencies.

Under a new government regulation gazetted last week Friday, authorities will order broadband providers, landline and mobile phone companies to save the information for up to five years. This is under a security scheme contained in the new constitution that seeks to safeguard national security. …

Prisoners say cuts will leave no money to support families, pay for education

Inmates in several federal prisons across Canada have gone on strike to protest against a 30 per cent cut in their pay that took effect this week.

The government began deducting the money from prisoners’ paycheques as part of a move to recover costs under the federal government’s Deficit Reduction Action Plan. The move was first announced in May 2012 by Public Safety Minister Vic Toews.

Until now, the top pay an inmate could earn was $6.90 a day, but only a small percentage of inmates received that. The average is $3 a day.

That rate was set up by the government in 1981. It was based on a review by a parliamentary committee and it factored in a deduction from inmates for the cost of room, board and clothing at the time. …

Villagers of Gabugasi, in Saghalu ward, West Guadalcanal are mourning the passing of their first paramount chief, the late Albert Bosa (OBE).

The late Bosa, once a World War II veteran with the US naval forces during the battle of Guadalcanal, was a very well recognised leader not only in his native West Guadalcanal region, but also throughout the country.

Appointed as paramount chief in 1966, the late Bosa was instrumental in advocating law and order and social development within the West Guadalcanal. …