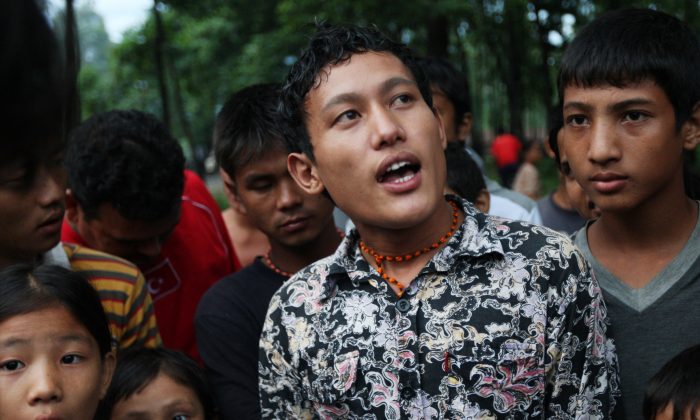 A file photo of a Bhutanese refugee Milan Kumar Rana, 22, at a camp in Nepal expressing hopes to move to Australia. An October 2013 article by Bhutanese publication Kuensel Online looks at the mass migration of youth to Australia for better opportunities and how it has changed over the decades. (Prakash Mathema/AFP/Getty Images)
International

MANAMA—A 90-year-old Saudi man was “forced” to remarry after his daughters and sons insisted he honoured their mother’s dying wish.

The bride, 53, was selected by the Fatees Al Thaqafi’s five daughters who spent three months looking for the right wife for their father, local news site Sabq reported on Sunday.

The daughters did not want a young woman and looked for a mature woman who would be right for their father. They eventually found a childless widow in a remote village who accepted the marriage proposal. …

Uganda: The Priest Who Was Nearly Eaten

In part five of our series on cannibalism and the related social upheavals in Uganda, Hope Mafaranga and Robert Atuhairwe focus on Isingiro district. And, in Kyenjojo, a story of how a priest, who challenged cannibals, almost got eaten.

The Police at Rugaaga in Isingiro say they get six to 10 witchcraft-related cases per month. Of these, three are over claims of cannibalism. An officer at the Police station, who preferred anonymity, said they sometimes get to know after violence has flared up.

“Reports about cannibalism and witchcraft are common, especially in Katooma village,” he said, adding: “When locals suspect a person of being a cannibal, they lynch him. But we have failed to convict anyone because complainants do not have sufficient evidence.” …

The New Vision via All Africa

Imagine a politician who always wears sunglasses, who has won the lottery nine times, and who has even had a statue erected in his own honour. All sound a bit shady? That’s Carlos Fabra …

Last week, surfer Adán Rivera was attacked by a crocodile on Tamarindo Beach, and he lived to tell the story. But that story has a different protagonist than you might expect – the reptile.

“The crocodile had as much a right to be there as I did, if not more,” Rivera said in an interview with The Tico Times a few days after the incident. He seemed miffed that there had been a question of whether authorities would remove the animal, and recounted the incident as if it were merely a temporary setback. …

Spying on allies is all in a day’s work, the former head of France’s domestic intelligence agency (pictured) said on Thursday, following reports that the US National Security Agency recorded millions of French phone calls.

France spies on the US just as the US spies on France, the former head of France’s counter-espionage and counter-terrorism agency said Friday, commenting on reports that the US National Security Agency (NSA) recorded millions of French telephone calls.

“I am amazed by such disconcerting naiveté,” he said in the interview. “You’d almost think our politicians don’t bother to read the reports they get from the intelligence services.” …

The talk of the town for the past several weeks has been about the growing number of Bhutanese heading off to Australia to further their education.
In day-to-day conversations, numbers are generally rattled off to indicate a sort of exodus.

Examples are the long lines waiting to get medical clearances, people in all sectors resigning to do the paperwork and running around, half the Drukair flight to Bangkok full of people heading for Down Under.

For Bhutanese, Australia has been a destination for higher studies since the ‘70s, when the first group was sent there on government scholarships.

Many of those early scholars have since served the government and retired, and many continue to serve in important and influential positions.

Until recently, the only way to get to Australia was through scholarships offered by the Bhutanese government and the government of Australia.  Only a handful went on private funding. …