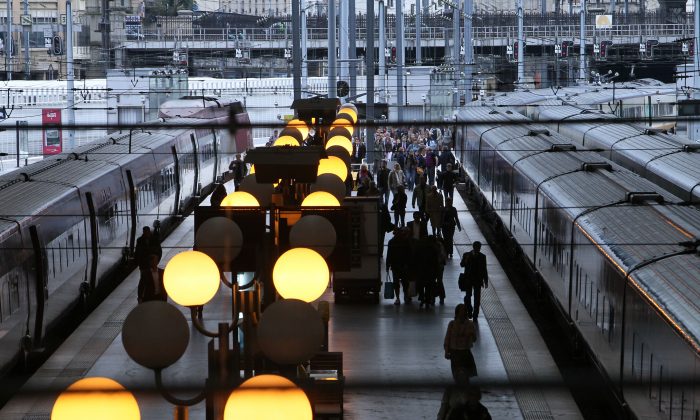 French commuters walk on a platform at Gare du Nord railway station in Paris on Sept. 7, 2010. The French commute is about to get more productive, as France 24 reported in October 2013, with a pilot program that brings English lessons aboard commuter trains. (Pierre Verdy/AFP/Getty Images)
International

Korea: Coffee with a Korean twist

An egg yolk, a pinch of salt, some pine nuts, walnuts and a drop of sesame oil: Sounds like some tasty ingredients for a light salad or quick meal, but no, these are the ingredients of Korea’s once-popular coffee concoction “morning coffee.”

In the 1960s and ’70s, morning coffee in Korea had an entirely different meaning than the ritualistic cup of joe so many people grab before heading out to face the world. Morning coffee was the beverage of choice at the local “dabang” ― old-time Korean coffee shops ― where people stopped by in the morning to grab their breakfast-in-one served piping hot in a cup. …

French commuters now have a novel way to fill the time travelling to and from Paris by train, with English lessons taking the place of emails, spreadsheets and morning snoozes.

The scheme – being piloted on two routes between Reims and Châlons-en-Champagne in eastern France and Paris – is aimed at regular commuters travelling to and from the capital who want to make better use of the trip. …

Australia: ‘You get a lot less today for a million’

Once, $1 million would buy you a mansion. Now you’d be lucky to find an inner-city maisonette for that price.

The strongest spring property market in a decade has cemented Sydney’s spot as Australia’s million-dollar capital – one in five Sydney suburbs now has a seven-figure median house price. …

Costa Rica launched a one-of-a-kind environmental bank, BANCO2, Thursday afternoon to trade and verify carbon credits. But is there enough demand to sustain the novel market?

A new bank opened in Costa Rica Thursday afternoon. BANCO2, the first “environmental bank” of its kind in the world, doesn’t trade or lend money, but it could have big economic implications for improving energy efficiency and reducing carbon emissions here and around the world.

BANCO2 provides commercialization and brokerage services for carbon dioxide credits, as well as promotion, monitoring, reporting and verification of national CO2 mitigation and reduction projects. The bank is the latest in a series of programs and investments by the Costa Rican government to reach its goal of carbon neutrality by 2021. …

It has been years since the Castle in Tripoli hosted a musical event – possibly decades. But last week, in another sign that Libya is back in the real world ,it was the venue for a fusion of cultures that was a stomping success – clearly enjoyed by all who attended.

The event ­– a multicultural tour de force of sound – was put together by the Ministry of Culture and the German Embassy. Berlin-based jazz trio 105 Lenz Kubach Johnson played alongside Tripoli’s own singer and songwriter Hani Elkot. Their combined efforts provided an evening of enjoyment for all the guests present that few will quickly forget. …

The world is fascinated by Europe’s biggest economy. Despite the economic crisis, Germany has grown, created more jobs, and reduced its national debt. But what makes the so-called “German model” work so well?

As a rule, the economic system is usually fairly important to an economy’s success. That, after all, is what creates the conditions for a country’s economic activities. In Germany, this system is a “social market economy” – on the one hand, it is based on capitalist competition, but on the other hand it still allows the state to provide social correctives. …

Railway officials are touting their new high-speed magnetic levitated train, which are expected to begin operations in 2027, the first in the nation, as cutting the travel time so much that smokers can resist the need to light up.

They’ll have no choice, since the entire train will be nonsmoking and there will be no smoking rooms aboard, reflecting the growing public aversion to the smoke-filled cars of the past on the nation’s railways.

“From Shinagawa (in Tokyo) to Nagoya, it takes only 40 minutes by maglev,” said Yoshiomi Yamada, president of Central Japan Railway Co. (JR Tokai), operator of magnetically levitated train services, told a news conference on Oct. 17. “I am sure smokers can endure it.”

A 500-kph maglev on the Chuo Shinkansen Line is expected to connect the two metropolises in about 40 minutes, compared to about one hour and 40 minutes by a bullet train. …