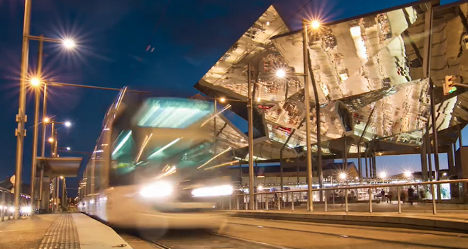 A screenshot of a time-lapse video of Barcelona, Spain, made by Alexandr Kravtsov. The Local interviewed Kravtsov about his film and his love of Barcelona. (Screenshot/YouTube)
International

Italy: Franceso most popular name in Italy for 2013 births

Francesco has reached the top of the rankings amongst names given to new-borns in Italy so far this year thanks to the popularity of Pope Francis.

The choice shows the heartfelt attitudes of the population of the Catholic nation that surrounds the small city-state of the Vatican, according to a new survey published on Thursday. …

An angry father contacted WalesOnline after being told about a visit made by police officers to his child’s primary school in the Llanedeyrn district of Cardiff.

He said: “Obviously it’s a good idea to educate children about the danger of dog mess. But when I heard the exercise had been named Operation Irish, I thought it was outrageous. It’s like a throwback to earlier centuries, when Irish people were portrayed as monkeys or sub-human creatures. …

Germany: Learning to Fight: How Afghanistan Changed the German Military

In Afghanistan, dangerous combat has helped post-war Germany’s reluctant armed forces gain self-confidence and expertise. But with the public and politicians loath to enter into new conflicts, what will the military’s role be going forward?

The German military entered Afghanistan over a decade ago as a peacekeeping force tasked with aiding in the reconstruction and development of infrastructure and civil society. Today, it leaves the country as a combat force that engaged in deadly warfare.

The evolving role of the Bundeswehr, Germany’s armed forces, in the conflict has helped to dramatically reshape it as a more experienced and capable fighting operation. Yet the German public has become even more opposed to military engagement overseas than it was 10 years ago …

A video artist has taken 24,000 photographs and travelled on the city’s metro almost 100 times to create an amazing time lapse portrait of the Spanish city of Barcelona.

Alexandr Kravtsov, from the city of Minsk in Belarus, took three months to create the 5-minute film of Spain’s most popular city holiday destination.

He shot the footage while staying with Spanish friends he met on a recent project in Russia.

“I love the rhythm of life in Barcelona,” Kravtsov told The Local.

First Lady Ani Yudhoyono has directed her anger toward one of her Instagram followers for making a comment about her fashion choice. …

She replied: “…Your comment is so stupid. Why did you not think that perhaps we were on an official engagement and had just taken a brief moment to enjoy the beach? Come on, have you nothing better to say?”

The target of Ani’s temper then responded, asking for her guidance so he could be smarter. …

This is not the first time an Instagram comment has upset the First Lady. Previously, Ani was left fuming after a number of Instagram users accused her of editing a photograph of her granddaughter. …

COPENHAGEN—Left-wing groups lost their gathering place in 2007. The city is now tentatively moving forward with a proposal to build youth housing on the site where it once stood.

City politicians want to build affordable housing for young people on a contentious plot of land in Copenhagen’s Nørrebro district.

The plot on Jagtvej 69 used to be home to Ungdomshuset, a youth culture centre run by an anarchist and left-wing community that had squatted the building since 1982.

In 1999 the city council sold the building and it ended up in the hands of Faderhuset, a Christian sect. In 2007, Jagtvej 69 became one of Denmark’s most famous addresses. …

The demise of Choice FM as the pioneering black radio station has reignited debate on the future of ethnic media in Britain. One of the most repeated criticisms and concerns from Voice readers has been the reason behind the sale of the station a decade ago.

From the moment the independent black-owned station passed into the hands of a mainstream company, many industry insiders felt the writing was on the wall in terms of it staying true to its black identity and playing the music and broadcasting the news that would matter to its core audience. …