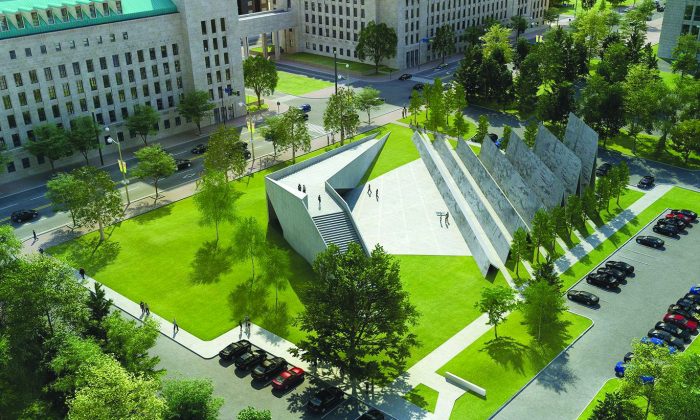 An artist’s rendering of the National Memorial to Victims of Communism slated to be built this year. As controversy swirls over the location of the memorial, leading Chinese democracy activist Shen Xue says such a prominent spot is actually ideal. (ABSTRAKT Studio Architecture)
Canada

OTTAWA—A prominent Chinese-Canadian writer and democracy activist who left China after the Tiananmen Square massacre in 1989 says she is disheartened over the controversy surrounding the location of the National Memorial to Victims of Communism.

The memorial is slated to be built on Wellington Street in Ottawa near the Supreme Court of Canada and the Justice Building—a location opponents say is too prominent and an inappropriate choice.

Sheng Xue is a key leader of the overseas Chinese democracy movement and an award-winning writer who lives in Toronto. Having grown up under the repressive communist regime that rules China, she believes that putting the memorial in such a prominent location is desirable “because communism has been the worst disaster in the world for the past 100 years, and directly impacted Canada, which participated in the Korean War.”

“From the standpoint of history or culture or multiculturalism or upholding universal principles, it is necessary and meaningful for the monument to be situated at a location as prominent as the current one,” Xue says.

It is something that brings glory by building this monument in such a prominent location.
— Chinese democracy activist Sheng Xue

“This national monument should be supported by all parties because Canada has a moral responsibility.”

Support from all parties was in fact the case until recently. On the website of Tribute to Liberty, the organization that spearheaded the project, messages of support from NDP Leader Tom Mulcair, Liberal Leader Justin Trudeau, Green Party Leader Elizabeth May, and Prime Minister Stephen Harper are still prominently featured.

But now, the Liberals and NDP MP Paul Dewar, whose riding includes the memorial site, are lending their voices to a growing chorus of opponents who want the government to move the memorial to a different location.

On Feb. 26, Ottawa-area Liberal MPs and candidates held a press conference calling on the government to reconsider the location.

Stephane Dion, the party’s critic for Canadian Heritage, said in a news release that while the Liberals are not against the memorial, the current venue is not “an ideal choice.”

“Amongst other things, it would make it impossible to complete a long-envisaged, ‘judiciary triad’ project—a complementary companion piece to the parliamentary triad—that is meant to include the existing Supreme Court and Justice Buildings as well as a future judicial building that could house the federal judiciary,” he wrote.

Some Liberals have suggested moving the memorial to the nearby Garden of the Provinces, or holding public consultations on other location options.

In response, Canadian Heritage Minister Shelly Glover issued a statement saying the government “assigned the site in accordance with the appropriate process,” noting that the chosen location was announced publicly in the summer of 2013.

She also criticized Trudeau for changing his stance, saying he “knew where the memorial site was when he sent his support letter for the project.”

“The Liberals are now effectively telling the 8 million Canadians that trace their origins to countries affected by the scourge of communism that they do not deserve a prominent site for their place of collective memory.”

According to Tribute to Liberty chair Ludwik Klimkowski, in the early days of the project, the Chinese Embassy sent a letter to the National Capital Commission showing concern over the memorial. Afterward, there was a push to replace the word “communism” with something else to avoid offending the embassy, he says.

He adds that “there are a number of people who are desperately trying to make this a political issue, and there are individuals who are trying to score rather cheap political points before an upcoming election.”

As for the location, Klimkowski feels it couldn’t be more apt.

“If you think about it, it is all about justice and rule of law. And that is why we need this to be next to the Supreme Court of Canada and next to the Justice Building,” he says.

Xue agrees, noting that the tyranny wrought by communism—which worldwide has led to the loss of more than 100 million lives—continues to cause harm to humanity.

“It is something that brings glory by building this monument in such a prominent location. All Canadians should have such feeling,” she says. “Communism continues to harm this world—it is an ongoing issue.”