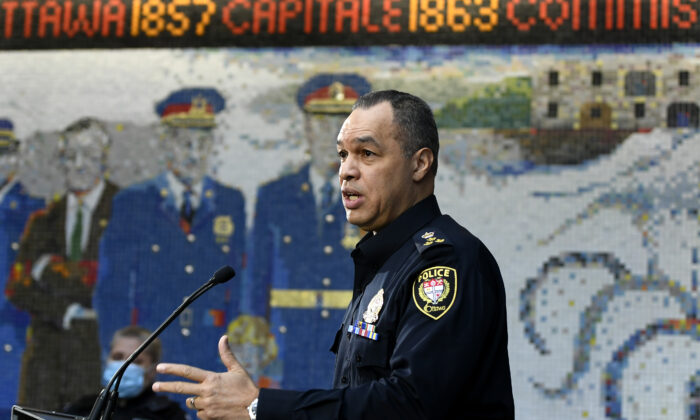 The chief of police in Ottawa says his efforts and those of the city are behind the cancellation of the GoFundMe campaign in support of the Freedom Convoy.

Chief Peter Sloly outlined the enforcement actions taken so far against the protesters in a press conference on Feb. 7 and said these actions were responsible for the reduced numbers of trucks and people participating. He said targeting the protesters’ funding has been key.

“What particularly has occurred of a significant nature, we went after the funding. Our efforts combined with the city’s efforts eliminated the GoFundMe,” Sloly said. “Ten million dollars are no longer accessible to the demonstrators.”

In a press conference of their own the day prior, protest organizers said the cancellation of the fundraiser was a result of political interference.

“It was clearly direct interference from the government to cancel this campaign,” said protest organizer Benjamin Dichter on Feb. 6.

Besides Ottawa Police, after GoFundMe pulled the funds, Ottawa Mayor Jim Watson thanked the company for “listening to the plea made by the City and the Ottawa Police to no longer provide funds to the convoy organizers.”

The House Committee on Public Safety on Feb. 3 had called on GoFundMe to testify about the source of the funds and to ensure it would not “promote extremism.”

Organizers had stated the funds would be used to pay for the truckers’ expenses such as fuel, food, and shelter.

GoFundMe cancelled the Freedom Convoy fundraiser on Feb. 4, claiming it received information from law enforcement that the protest had become an “occupation” and violated its terms of service. The fundraising platform initially said the collected funds would be directed to other charities, but it later reversed course under pressure and said it would automatically reimburse the donors.

The California-based company has been accused in the past of taking political stances and having double standards by allowing campaigns aligned with its ideology while cancelling those it opposes.

While it removed the Freedom Convoy campaign, it previously promoted on Twitter a campaign of someone involved in the Capitol Hill Occupied Protest (CHOP) in Seattle in the summer of 2020, an occupation where police were barred form entering and that was rife with lawlessness.

GoFundMe also suspended the campaign of a Texas nurse last October who was fired for refusing the COVID-19 vaccine and was collecting funds to launch a lawsuit, citing “misinformation” that violated the company’s terms of service.

From the set-up of the fundraiser, the platform has been overwhelmed by traffic and cyberattacks, but within a very short time it has raised over $6 million as of Feb. 8 morning. GiveSendGo said in a Feb. 7 press release that this campaign is its largest ever.

“Along with the tremendous showing of support, there has also been plenty of push back,” said Jacob Wells, co-founder of GiveSendGo.

“We’ve seen nearly 10 million bots trying to overwhelm our servers in just the past two hours. Though this has caused issues for the platform, we will not let it stand in the way of providing a safe and effective means of fundraising for our campaign owner[s] across the globe.”

The Ottawa Police is likely to go after this source of funds as well, according to statements by its chief in the press conference, but it could prove harder given GiveSendGo’s position that the “freedoms we have are God-given, not authorized by governments.”

“There are other funding avenues that we continue to aggressively go after, through intelligence, information, coordination with financial institutions, and all three levels of government. We will be relentless in pursuing the funding that has enabled this demonstration to continue to this point,” said Chief Sloly.

Meanwhile, GoFundMe’s actions have been noticed and criticized in the U.S., where Republican politicians and administrations have vowed to investigate.

Texas Sen. Ted Cruz said he sent a letter to the Federal Trade Commissioner asking to “open an investigation into GoFundMe into whether they’ve committed deceptive trade practices,” he told Fox News.

Florida Governor Ron DeSantis said on social media he would be working with his Attorney-General Ashley Moody to investigate these “deceptive practices,” referring to GoFundMe’s initial announcement that it would give the donations for truckers to charities it has validated.