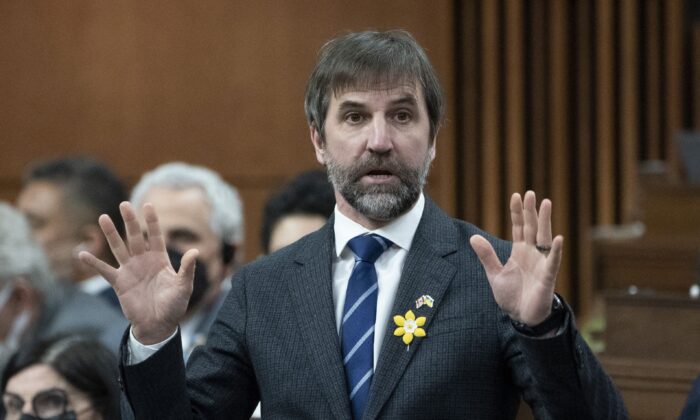 Minister of Environment and Climate Change Steven Guilbeault rises during question period in the House of Commons on April 4, 2022. (The Canadian Press/Adrian Wyld)
Canada

The federal government has released a discussion paper outlining two options to cut emissions from the oil and gas sector to achieve 2030 targets and net zero by 2050, and is calling on stakeholders to provide input.

The two options proposed by the Liberal government include the development of a new cap-and-trade system and the modification of existing carbon pollution pricing systems.

“With this cap, we will work with industry, provinces, Indigenous groups, civil society, and others to take action on drawing down the emissions from oil and gas production.”

The discussion paper says that the cap-and-trade option would set a quota on the greenhouse gas (GHG) emissions allowable within a defined period, which would decline over time.

Allowances would be fully or partially auctioned off, with proceeds that could be reinvested in sector decarbonization.

With the number of allowances for each tonne of emissions being less than the “business-as-usual emissions” in the system, it creates scarcity that drives demand in the cap-and-trade market, says the report.

Quebec and Nova Scotia currently have such a system in place.

The second proposed option includes building on the current federal approach to carbon pricing, with a modification to encourage further emissions reductions from the oil and gas sector.

The current federal benchmark includes a minimum national price per tonne of CO2 eq emissions which rises by $15 per year to reach $170 per tonne in 2030.

The paper says that if the carbon pricing set for the entire economy is on pace to achieve emissions targets, then it would also apply to the oil and gas sector. If not, the sector would have to follow another pricing scheme to accelerate emissions reductions.

Environment Canada says the oil and gas sector accounted for approximately 27 percent of total GHG emissions in 2020, which makes it the largest source.

The government is seeking input from stakeholders on the proposed options by September 30.

The new policy is expected to be revealed in early 2023.