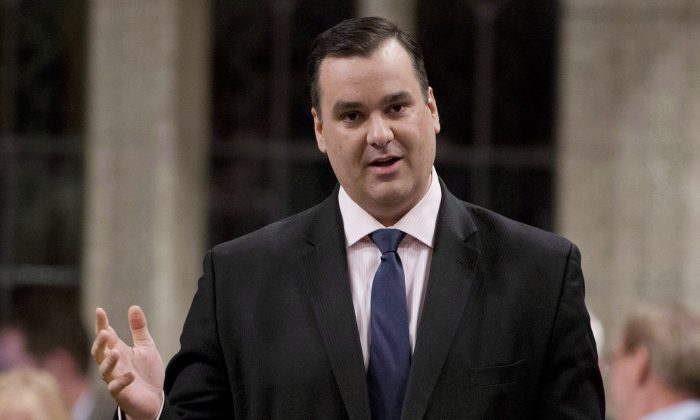 Industry Minister James Moore speaks during question period in the House of Commons on Dec. 18, 2013. The government says it will move to put a cap on domestic wireless roaming rates charged by big telecoms. (The Canadian Press/Adrian Wyld)
Canada

Canada’s biggest telecom companies are facing a cap on the wireless roaming rates they charge smaller rivals for using their networks and could face fines for breaking rules that govern the industry.

Industry Minister James Moore announced Wednesday that the government is making legislative changes in an attempt to give consumers more competition in the wireless market, dominated by Rogers, Bell and Telus.

Roaming fees are charged when customers use their cellphones outside their own network provider’s coverage area.

Rogers, Bell and Telus have large national networks, but smaller providers such as Wind Mobile, Mobilicity, Maritime-based Eastlink, and Quebec’s Videotron have to negotiate agreements with the Big Three to give their customers service across the country when they travel.

Moore said the legislative changes will be in place until the Canadian Radio-television and Telecommunications Commission, which is already investigating roaming rates, makes a decision on roaming rates.

Last week, the CRTC said it will look into whether big wireless companies are charging their smaller Canadian competitors too much to use their networks.

The government will also make changes to give the CRTC and Industry Canada the ability to fine companies that break rules such as the wireless code and agreements on deploying wireless spectrum needed to build networks and cellphone tower sharing.

“The penalties will encourage compliance and allow for more effective remedies should violations occur,” Moore said.

Under the current rules, Industry Canada decided that established wireless players have to allow new wireless companies the use of their networks, but the terms were left to be worked out between them. However, the smaller companies have complained that the rates the large, established companies charge are too high.

Canaccord Genuity analyst Dvai Ghose said the move should help the new wireless companies in theory, but said it’s “too little too late.”

Ghose noted that Wind Mobile’s majority owner, Russian telecom VimpelCom, has put its stake up for sale and struggling Mobilicity is operating under creditor protection and is also up for sale. Public Mobile has been sold to Telus.

“In our view, the only potential beneficiaries may be Videotron and Eastlink customers when they roam off network,” he said in a research note.

Ghose said Rogers is the main provider of roaming services to the new wireless companies, but assumes that agreements only generate $50 million or less in domestic roaming revenue.

“We expect Rogers to generate $6.8 billion of network revenue in 2013, implying that domestic wholesale roaming revenues are largely immaterial.”