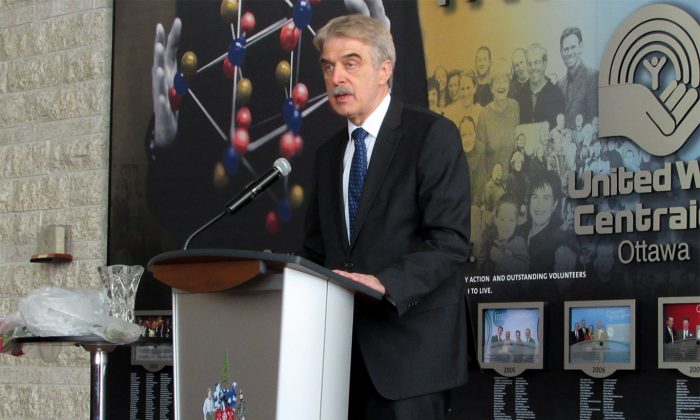 OTTAWA—Hundreds gathered at Ottawa City Hall on Jan. 27 for a memorial marking the 70th anniversary of the liberation of Auschwitz-Birkenau and the 10th annual International Holocaust Remembrance Day.

It was on Jan. 27 in 1945 that the Auschwitz concentration camp was liberated.

Kenney quoted from “The Book of Laughter and Forgetting” by Czech writer Milan Kundera.

I wanted to come because I want to say thank you to Canada.
— Holocaust survivor Vera Kovesi

A number of Holocaust survivors were among the attendees, including 82-year-old Vera Kovesi, originally from Hungary.

“Except for me, my 7-year-old brother, and my mother, my whole family died in Auschwitz, including my father, my grandparents, my uncle, my aunt and my cousins,” Kovesi told the Epoch Times in an interview.

It was during the Nazi occupation of Hungary in 1944 that Kovesi’s family was sent to Auschwitz. Kovesi, who was 12 at the time, her mother, and her brother hid out in Budapest and escaped being sent to the concentration camp.

Kovesi’s 86-year-old husband, a survivor of Auschwitz, was unable to attend the ceremony due to the bad memories it would bring up for him, she said. Combined, more than 50 members of the couple’s families died in the Holocaust.

“I wanted to come because I want to say thank you to Canada.”

Between 1933 and 1945, close to 6 million people, mostly Jews, were killed in concentration camps. Poland’s Auschwitz, where more than a million Jews died, has become the symbol of holocaust.

“It is our obligation to educate our younger generation about the lesson of Auschwitz,” Barak said in his speech.

Wnendt said that there have been many events over the past few days in Germany to mark the anniversary of the Holocaust and the liberation of Auschwitz, but even so there is “ongoing” anti-Semitism in his country.

“That is why it is not enough on a single day just to remember, but it is important to educate, on a daily basis, in schools, in the media,” he said.

“It is not enough to look only to the past, but also to see the present and the future.”