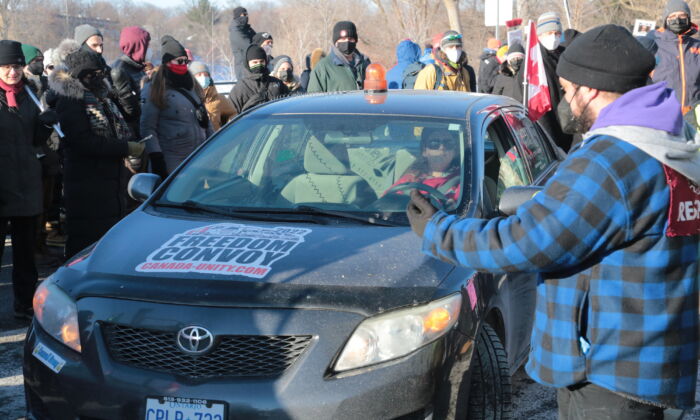 A trapped pro-trucker protest driver was eventually allowed to leave after she was blocked by counter-protesters, in Ottawa, Canada, on Feb. 13, 2022. (Richard Moore/The Epoch Times)
Canada

OTTAWA, Ontario—Hundreds of residents of the Canadian capital of Ottawa staged a counterprotest against the Freedom Convoy on Feb. 13, trapping 20 vehicles of pro-trucker convoy protesters on a road, saying they want the demonstrators who have gridlocked the city’s downtown area for more than two weeks to leave.

The trucker protests are part of a larger movement against the government’s COVID-19 mandates and restrictions.

According to the Canadian Broadcasting Corp. (CBC), the counterprotest began on Feb. 12 with a demonstration by hundreds of people marching through the Ottawa suburb of Glebe. The action resumed at 9 a.m. on Feb. 13 as a reported group of 20 people blocked a major intersection in an attempt to keep vehicles from driving to government offices at the city center.

By noon, there were about 200 people involved in the blockade about five miles from Parliament Hill, the CBC reported.

Three hours later, an Epoch Times reporter estimated the crowd to have grown to more than 1,000 people surrounding the line of vehicles.

The drivers and passengers of the pro-trucker protest vehicles stayed calm during the confrontation, amid colorful language directed at them by counterprotesters.

People walked past the vehicles, pushing signs and placards toward the occupants to make sure they could read the messages.

They included: “No hatred in our streets,” “Please [expletive] off,” “Grow up,” “Inactions against bullies equals tolerance,” “Enough is enough, end the siege,” “Villages: call your idiots home,” “Freedom from convoy bullies,” “You can’t mask ignorance,” “Believe science,” “No honks, no hate,” “Illegal occupation truck off,” “Freedumb convoy,” and “Go home terrorists.”

There was a tangible feeling of anger in the air as the counterprotesters vented at the drivers and their passengers.

On one occasion, a woman hit a pro-protest Ottawa man with a placard. The man, who reacted by smashing the sign to the ground, was eventually escorted from the area by police.

Several cars were allowed to escape the situation—courtesy of an agreement with those leading the counterprotest.

One woman—in a car adorned with a Freedom Convoy decal on the front hood, a flashing orange light on its roof, and a national flag that has become synonymous with the movement that has brought massive disruption to central Ottawa—was allowed to drive away because she had a “child care situation.”

Some counterprotesters objected because they said the trucker protest had caused them grief over the past two weeks.

It became very tense, and when police moved in to keep things calm, they became the targets of ridicule from people who said authorities hadn’t done enough to keep the peace during the truckers’ blockade.

When officers moved a person away from sitting in front of the vehicle, the reaction of the crowd verged on riotous.

Eventually, three vehicles were allowed to leave, but all the drivers were jeered. Organizers said they had agreed to take down flags and other symbols backing the truckers, but one left with a small emblem still fluttering, most likely due to her haste in trying to exit the area.

While the counterprotest leaders on megaphones declared victory, many of those in the crowd didn’t agree and let them loudly know they disagreed.

The Freedom Convoy movement was created by truck drivers opposed to the federal government’s requirement that all truck drivers crossing the Canada–U.S. border have to be vaccinated for COVID-19. The protests grew in scale as many people opposed to the COVID-19 mandates and other restrictions joined the movement.

Protest convoys converged on the capital city on Jan. 29, with many protesters saying they will stay parked outside the Parliament until the government lifts its COVID-19 mandates.