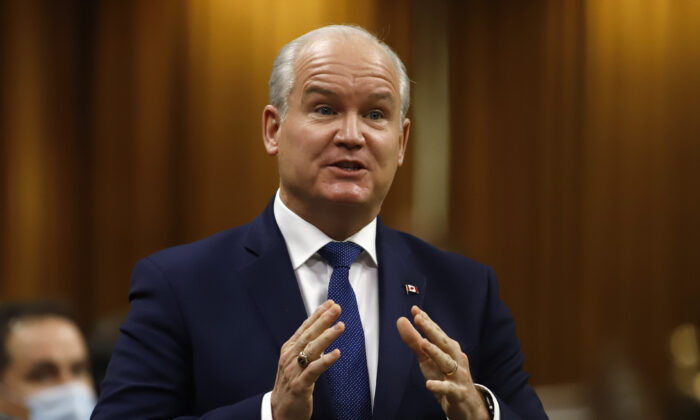 Conservative Party leader Erin O’Toole is blaming Prime Minister Justin Trudeau’s inaction on certain pandemic-related files for the state the country finds itself in, with new lockdowns, curfews, and restrictions being imposed almost two years in.

“Governments across the country had little choice but to take these steps because the federal government has not delivered on key tools to help Canadians manage the risks of a pandemic, in a population that is now largely fully vaccinated,” O’Toole said in a press conference on Jan. 6.

“In fact, the action and inaction by the Trudeau Government is normalizing lockdowns and restrictions as the primary tool to fight the latest COVID-19 variants.”

O’Toole’s comments come a day after Trudeau and other government officials provided an update on the pandemic situation in the country and announced the delivery of 140 million rapid tests to provinces and territories.

“What is crazy is we haven’t learned the lessons from the first wave. We’re back to ordering PPE [personal protective equipment] for Parliament Hill from China. We haven’t delivered rapid tests promised almost two years ago on his doorstep—he orders them in the middle of the fourth wave. That’s unacceptable,” O’Toole said.

The Tory leader said that his party will be convening an emergency meeting of the House of Commons Health Committee to “examine critical gaps in our country’s ability to effectively manage COVID-19 variants.”

On the issue of vaccination, O’Toole strongly encouraged the unvaccinated to get the shot and said he received his booster. He also suggested he supports the vaccine mandate in the military, saying he thinks “everyone in uniform should be vaccinated.”

But O’Toole said Trudeau’s hostile approach towards the unvaccinated is improper.

“Mr. Trudeau has tried calling names, announced a mandate without even getting a Charter opinion on the mandate,” O’Toole said when asked by a reporter what is wrong with imposing more stringent measures on the unvaccinated.

“In some cases, you will have to try and find reasonable accommodations between keeping people safe and people not losing their job, losing their home, not being able to provide for their kids. I don’t think that position is irrational when people’s lives are on the line.”

The day prior, Trudeau was asked by a reporter what else he would do to push people into getting vaccinated after imposing mandates, citing the example of French President Emmanuel Macron who said he would make life difficult for the unvaccinated.

“When people see that we’re in lockdowns, or serious public health restrictions right now because [of] the risk posed to all of us by unvaccinated people, people get angry,” Trudeau answered.

However, current data shows that those who are vaccinated are getting COVID-19 at high rates as well, making for a low difference between the vaccinated or the unvaccinated in terms of the risk of transmitting the virus. The latest data from the Ontario Science Advisory Table shows the vaccine efficacy in preventing infection with COVID-19 has dropped to 20 percent.