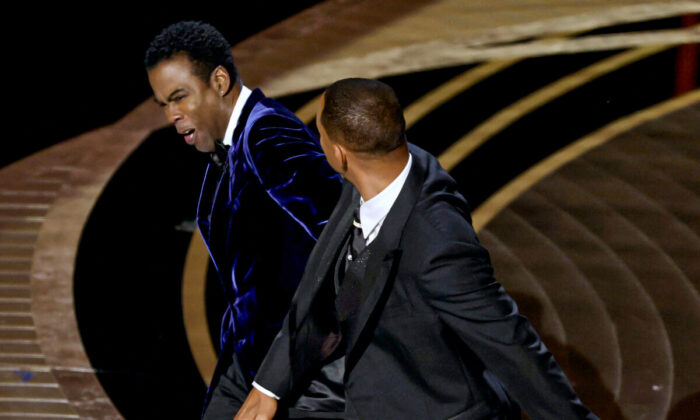 The organizer of the Oscars ceremony on Sunday said it “does not condone” violence after Best Actor nominee Will Smith smacked presenter Chris Rock across the face during the live broadcast.

“The Academy does not condone violence of any form,” the Academy of Motion Picture Arts and Sciences, the professional honorary organization behind the awards ceremony, wrote on Twitter after the ceremony.

“Tonight we are delighted to celebrate our 94th Academy Awards winners, who deserve this moment of recognition from their peers and movie lovers around the world.”

The statement came shortly after Sunday’s dramatic events which were prompted when comedian Rock took aim at some of the nominees for this year’s awards, including Smith.

Rock also joked about Smith’s wife Jada Pinkett Smith’s shaved head telling her: “Jada, I love you. G.I. Jane II, can’t wait to see it,” in reference to the 1997 film “G.I. Jane” in which actress Demi Moore shaved her head.

Pinkett Smith told Billboard in December she has been battling the autoimmune disorder alopecia, which can cause rapid hair loss and balding in the scalp, eyebrows, and eyelashes as well as other parts of the body.

ET Online reported that Pinkett Smith first discussed her alopecia battle in 2018, although it is unclear when she was first diagnosed with the disorder.

According to the American Academy of Dermatology (AAD), alopecia occurs when the body attacks its own hair follicles and can happen at any age, although it is most likely to develop during childhood or early teenage years.

Currently, treatment for alopecia consists of steroid injections and various forms of self-care.

Comedian Rock’s comment on Sunday saw Smith walk on stage and approach him, while his hands were behind his back, and throw an open hand at his face.

“Oh, wow! Wow! Will Smith just smacked the [expletive] out of me,” a visibly shocked Rock said to the audience, which could be heard laughing at what appeared to be a skit.

“Wow, dude. It was a G.I. Jane joke,” Rock said, to which Smith replied, “Keep my wife’s name out of your [expletive] mouth.”

“I’m going to,” Rock responded, adding, “That’s the greatest night in the history of television” while a visibly shocked and confused audience watched on.

Smith again repeated, “Keep my wife’s name out of your [expletive] mouth,” this time saying it a little louder.

Smith went on to win the Best Actor Oscar award for his role as Richard Williams, the father of tennis stars Venus and Serena Williams, in “King Richard.”

Upon accepting his award, Smith apologized to the Academy and his fellow nominees for his actions, saying that “love makes you do crazy things” and drawing comparisons with his actions and those of his character in “King Richard.”

However, he stopped short of apologizing to Rock.

“Richard Williams was a fierce defender of his family,” Smith said as he opened his acceptance speech while holding back tears. “I’m being called on in my life to love people and to protect people and to be a river to my people.”

Before leaving the stage, Smith said he hopes the Academy “invites me back” in the future.