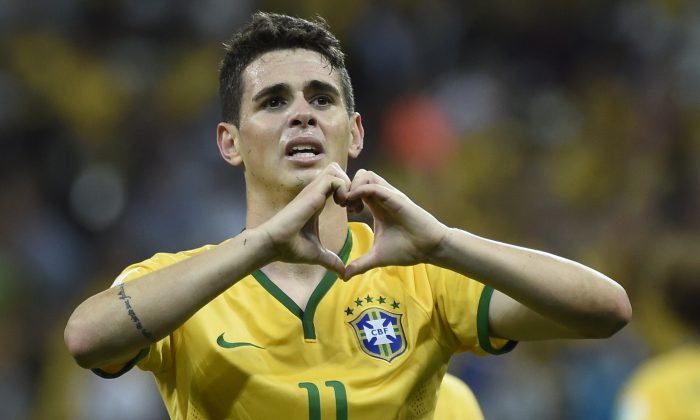 Brazil's midfielder Oscar celebrates after scoring a goal during a Group A football match between Brazil and Croatia at the Corinthians Arena in Sao Paulo during the 2014 FIFA World Cup on June 12, 2014. (ODD ANDERSEN/AFP/Getty Images)
News

How did Chelsea and Brazil star Oscar play in last season?

The 22-year-old attacking midfielder is having a rough patch in this World Cup, despite scoring 1 goal and providing 2 assists for Brazil.

Often times, Oscar simply fades away from a match, and the trend is becoming quite alarming.

In the 2013/2014 season for Chelsea, Oscar made 33 appearances in all competitions, scoring 9 goals and notching 6 assists, according to WhoScored.com.

Of course, statistics can only go so far in judging a player, but Oscar needs to rediscover a way to influence a game if Brazil are to make the World Cup Championship game.

“We are waiting for a good performance by Brazil. We are not playing well. I am disappointed with the first four matches,” said Ronaldo, the joint leading World Cup goal-scorer of all time. “I think he (Scolari) will change something. I don’t know what.”

There has been much speculation that right back Dani Alves and striker Fred are in danger of being cut from the starting lineup. One player who will certainly be missing is defensive midfielder Luis Gustavo, who picked up a second yellow card and is suspended. Paulinho, who started the first three group games before being replaced by Fernandinho, is a candidate to return to the starting lineup.

Strikers Fred and Jo have between them netted just one of the eight goals scored by Brazil in the tournament so far. Like many of his countrymen, Ronaldo sees this faltering strike force as an area of concern.

“They aren’t playing well. There are no secrets, my advice is to run a lot and try and score as much as you can,” he said. “But it’s not easy to play like a No. 9, even if you have Neymar playing with you.”

Ronaldo can probably understand the pressure that is on the 22-year-old Neymar. Ronaldo was famously hit by a mysterious illness on the day of the 1998 World Cup final, with many blaming it on the pressure the then 21-year-old forward was facing. But he thinks Neymar, who has scored four goals so far in the tournament, can handle the expectations of the host nation.

“He’s like a kid, he’s just thinking about playing well and scoring goals,” Ronaldo said. “He is very calm, very relaxed. He is as good as any young player.”