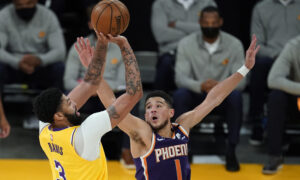 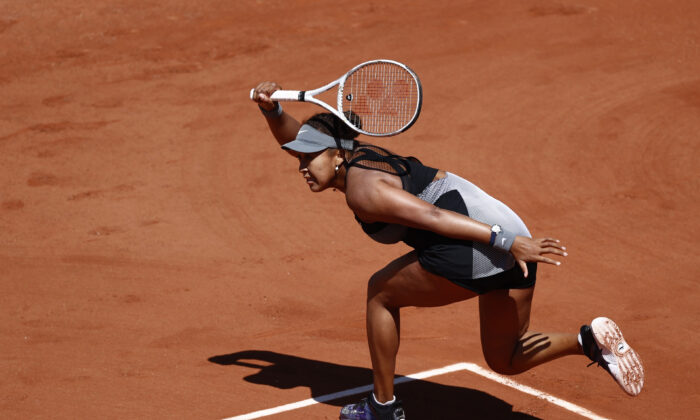 Japan's Naomi Osaka in action during her first round match against Romania's Patricia Maria Tig, in the French Open at Roland Garros, in Paris on May 30, 2021. (Christian Hartmann/Reuters)
Tennis

PARIS—World number two Naomi Osaka had to dig deep to defeat Romanian Patricia Maria Tig 6–4 7–6(4) as the four-time Grand Slam winner began her French Open campaign on the opening day on Sunday hoping to improve on her record at the claycourt major.

Osaka has not made it past the third round at her previous appearances at Roland Garros and arrived in Paris with only three matches under her belt on clay after early defeats in Madrid and Rome.

But the Japanese four-time major winner showed no signs of being distracted on a sun-bathed Philippe Chatrier court by the lively debate after her announcement that she would not hold press conferences at the French Open for mental health reasons.

Her media boycott did not include the post-match court-side interview, and asked about how she adapts her game to the surface, Osaka said: “It’s a work in progress. Hopefully the more I play the better I play.”

“I’m really glad that I won. It’s a beautiful court. I’ve only played two matches here [on Philippe Chatrier], one before the roof and one now, so hopefully I’ll keep it going.”

The 23-year-old Osaka, who missed last year’s tournament due to a hamstring problem, was not keen on engaging in long rallies and seemed too powerful against the 63rd-ranked Tig.

She stamped her authority on the match early by racing to a 5–2 lead with winners flowing from both her forehand and backhand. But the Romanian staged a fightback late on to get the set back on serve at 4-5 after saving three setpoints.

The break of serve seemed to have fired up Osaka as she broke Tig to love to win the opener, advancing to the net to hit a backhand off her opponent’s attempted dropshot.

The second set went on serve and Tig saved a breakpoint and a matchpoint to take it into a tiebreaker.

Osaka sealed it with a backhand winner—her 39th in the match compared with her opponent’s 19—to set up a second round meeting with another Romanian in Ana Bogdan, who beat Italian Elisabetta Cocciaretto 6–1 6–3.