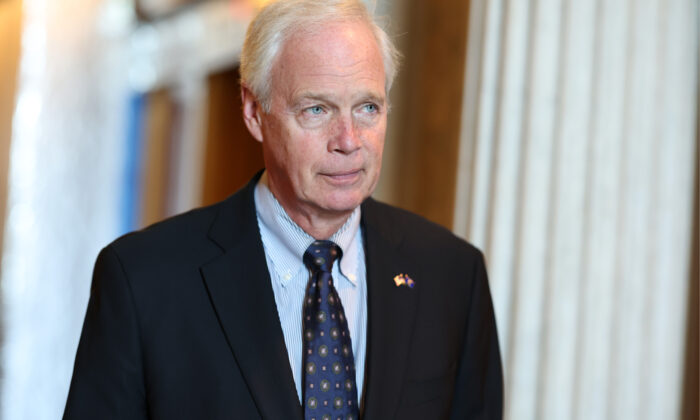 The Democrats’ $739 billion Inflation Reduction Act is “Orwellian,” said Sen. Ron Johnson (R-Wis.) on Fox News, saying that it will do nothing to help struggling Americans with high inflation.

President Biden signed the Inflation Reduction Act into law on Aug. 16, but White House officials have yet to say when the act would start reducing inflation or by what degree.

The Wisconsin senator has cast severe doubt on the bill, which was pushed through by the Democrats with almost no Republican support, which they claim will help lower rising costs.

Johnson met with voters at the Wisconsin State Fair on Aug. 12, where he said his constituents’ top concerns are inflation and gas prices.

“People can’t get by. They don’t have enough money to fill up the tank. They’re putting groceries back,” said Johnson, continuing, “this is what this election is about.”

“Consider how Orwellian the name of that bill is,” said Johnson.

Rep. Jim Banks (R-Ind.) agreed, declaring “It should be illegal to name a bill something that it doesn’t do, and this is one of many cases where the Democrats get away with this,” he said on Fox News.

The congressman pointed to the Affordable Care Act, which caused many Americans to lose their private health insurance.

“Go back and think about from bills like the Affordable Care Act to the Inflation Reduction Act—this is misleading to the American people, and there should be a rule in Congress that makes it against the rules of the House or the Senate to do what the Democrats have done this time again.” he said.

Give It Time, Say Democrats

The Democrats have been defending the act, explaining that critics need to give the provisions in the bill more time.

“As soon as the act goes into effect, I hope that all of the provisions will begin to work,” said Rep. Jamie Raskin (D-Md.) to Fox News.

Americans will finally notice the effects of the Inflation Reduction Act when they “see a reduction in the cost of their drugs, when people go to pay for affordable care, it will continue to be something they can afford on the exchanges,” Rep. Debbie Dingell (D-Mich.) told Fox News.

The Congressional Budget Office admitted that the bill will have “a negligible effect” on inflation in 2022, and in 2023 its impact would range between reducing inflation by 0.1% and increasing it by 0.1%.

Meanwhile, Johnson said that there was not a single good thing about the bill and that it will waste “hundreds of billions of dollars into the Green New Deal fantasy … That will also drive up prices.”

President Biden berated the Republicans during the White House bill signing, while basking in his victory.

“Every single Republican, every single one, voted against tackling the climate crisis, against lowering our energy cost, against creating good paying jobs,” warned Biden.

Biden also reiterated that his promise that the Inflation Reduction Act will not raise taxes on any American making less than $400,000.

Sen. Johnson slammed the fact that the bill would add 87,000 new IRS agents, far more than the roughly 20,000 overwhelmed Border Patrol agents at the U.S.-Mexican border.

“They are going to hire four times that number of people to harass middle-income Americans. It’s absurd,” said Johnson, who has concerns over the intended use of the new tax agents.

The senator said the best way to really ease inflation and bring prices down is for the United States to become energy independent again like it was before Biden and end the deficit spending.

Johnson is currently challenging Lt. Governor Mandela Barnes (D-Wis.), a supporter of the act, in the Wisconsin governor’s race in November.