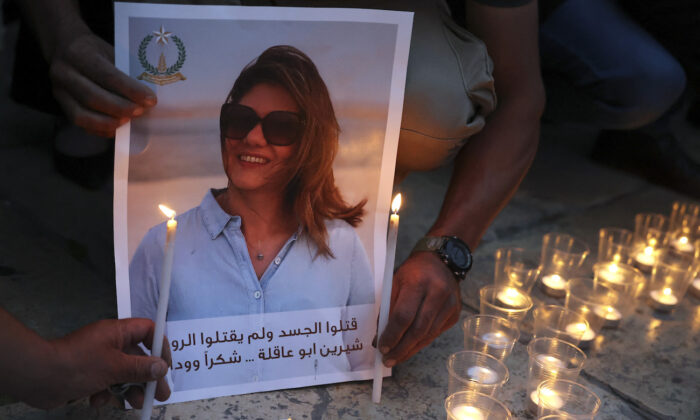 Family and friends of al-Jazeera reporter Shireen Abu Akleh, Anton Abu Akleh, attend a candle vigil outside the Church of the Nativity in the West Bank Biblical city of Bethlehem on May 16, 2022. (Hazem Bader/AFP via Getty Images)
Middle East

The U.S. Department of State on Monday said that independent investigators couldn’t clearly conclude the origin of the bullet that killed Al-Jazeera journalist Shireen Abu Akleh.

The 51-year-old reporter for Al-Jazeera’s Arabic language channel died on May 11 while on assignment covering an Israeli military raid in the West Bank city of Jenin and becoming caught in crossfire. When she was fatally shot in the head, Abu Akleh was wearing a bullet-proof vest that was marked “press.”

Independent, third-party investigators “could not reach a definitive conclusion regarding the origin of the bullet that killed Palestinian-American journalist Shireen Abu Akleh,” spokesperson Ned Price said in a statement. “Ballistic experts determined the bullet was badly damaged, which prevented a clear conclusion.”

The investigation was overseen by the U.S. Security Coordinator (USSC)—an office created by the State Department in 2005 that provides security assistance to the Palestinian Authority as part of an effort to help Israel and Palestine establish peace in the Middle East.

On the day of Abu Akleh’s death,  May 11, the Israel Defense Forces (IDF) said in a statement that its soldiers were carrying out counterterrorism activity in the Jenin camp and surrounding locations to “apprehend terror suspects,” during which they came under “massive fire … by tens of armed Palestinian gunmen.”

Israel’s later investigation into the shooting concluded that only a forensic analysis of the bullet would be able to confirm whether it was an Israeli or Palestinian who fired the shot that killed Abu Akleh. The IDF said in a statement issued Monday that if an Israeli soldier was responsible, the journalist would have been hit by mistake amid an exchange of gunfire with the terrorists.

“The IDF will continue to thwart terrorism wherever needed while taking precautions and measures to prevent harm to non-combatants. The IDF regrets harm to non-combatants, including during an exchange of fire or active combat zones, and is fully committed to protecting the sanctity of human life and the protection of the freedom of the press,” the statement reads.

Separately, the Palestinian Authority (PA), which had conducted its own investigation, had blamed Israeli soldiers for the journalist’s death. The PA on July 2 announced it would hand over the bullet that killed Abu Akleh to the United States for a ballistic analysis of the shell.

Price on July 4 said that the USSC had been granted full access to investigations by the IDF and PA, and after summarizing both investigations and conducting forensic and ballistic analysis, it concluded that “gunfire from IDF positions was likely responsible” for Abu Akleh’s death.

According to Price, the USSC concluded the shooting was likely not intentional “but rather the result of tragic circumstances during an IDF-led military operation against factions of Palestinian Islamic Jihad” that came after a series of terrorist attacks in Israel.

In a statement, Abu Akleh’s family said they “will continue to call for justice and accountability” and urge the United Nations and International Criminal Court to “take immediate action in order to bring justice.”

President Joe Biden is set to visit Israel and the West Bank next week.