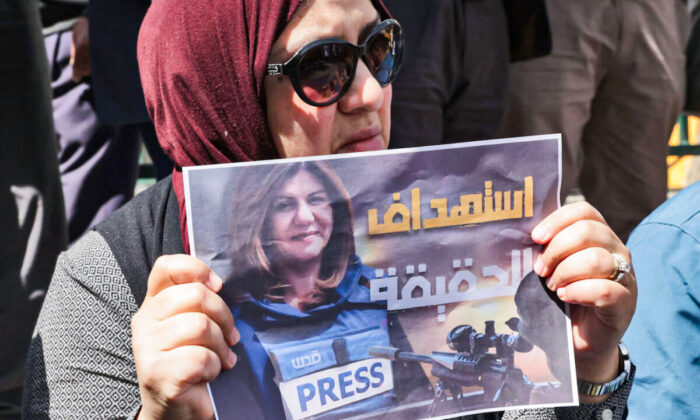 Palestinians hold posters displaying veteran Al Jazeera journalist Shireen Abu Akleh, who was fatally shot as she covered a raid on the West Bank's Jenin refugee camp in the West Bank city of Hebron, on May 11, 2022. (Hazem Bader/AFP via Getty Images)
Middle East

Unclear which side fired the shot
By Gabrielle Stephenson

An Al Jazeera journalist was fatally shot on May 11 while on assignment in the West Bank, according to the Qatar-based network.

Shireen Abu Akleh, 51, a Palestinian American reporter for the network’s Arabic language channel, was wearing a press vest when she was shot in the head. The Palestinian health ministry said she was rushed to a hospital in critical condition before being declared dead, the network reported.

At the time, Abu Akleh was reporting on a raid by the Israel Defense Forces (IDF) on the Jenin refugee camp in the West Bank. She had been covering the latest in intensified Israeli military incursions in the West Bank amid deadly Arab street attacks in Israel.

Israeli Prime Minister Naftali Bennett said on May 11 that Abu Akleh may have been killed by Palestinian gunfire, and that the Palestinian Authority rejected an Israeli offer to carry out a joint autopsy.

“According to the information we’ve gathered, it appears likely that armed Palestinians—who were indiscriminately firing at the time—were responsible for the unfortunate death of the journalist,” Bennett said in a statement, according to Agence France Presse.

A second journalist, who was wounded at the time, is in serious but stable condition, The Jerusalem Post reported. Ali Samoudi, a Palestinian journalist who works for the Jerusalem-based Quds newspaper, was struck in the back.

The IDF said in a statement on May 11 that its soldiers were carrying out counterterrorism activity in the Jenin camp and surrounding locations to “apprehend terror suspects,” during which they came under “massive fire … by tens of armed Palestinian gunmen.”

The IDF says it’s investigating the incident, including “looking into the possibility that the journalists were hit by the Palestinian gunmen.”

Asked about the military’s remarks, Samoudi told Reuters, “There were no resistance fighters near us.”

Al Jazeera interrupted its broadcast to announce her death. In a statement flashed on its channel, it called on the international community to “condemn and hold the Israeli occupation forces accountable for deliberately targeting and killing our colleague.”

“We pledge to prosecute the perpetrators legally, no matter how hard they try to cover up their crime, and bring them to justice,” Al Jazeera said in a statement.

A U.S. Embassy spokesperson in Jerusalem said Abu Akleh had covered issues in the Middle East and internationally for more than two decades and was “deeply respected by many Palestinians and others around the world.”

“Very sad to learn of the death of American and Palestinian journalist Shireen Abu Akleh,” Tom Nides, the U.S. ambassador to Israel, wrote on Twitter. “I encourage a thorough investigation into the circumstances of her death and the injury of at least one other journalist today in Jenin.”