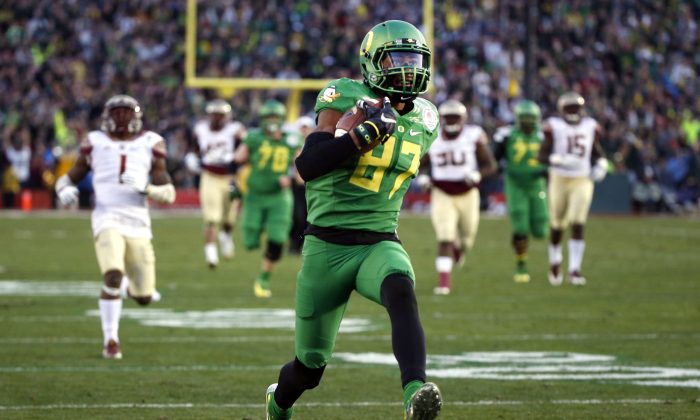 The Oregon Ducks take on the Ohio State Buckeyes on Monday night, and fans are wondering about the betting odds and other related information for the game.

However, the Buckeyes were eight point underdogs against Alabama in the Sugar Bowl, but still managed to win 42-35. It was also the underdog in its game before that.

SuperBook head oddsmaker Ed Salmons noted that the line has moved significantly all week, including after Oregon wide receiver Darren Carrington was suspended for the game, but it headed back up over the weekend.

“I’m hearing rumors that someone else is on Oregon in this game,” Salmons told ESPN, referring to a professional bettor. “I’m not going to be surprised if this line doesn’t push up to minus-7.”

The over-under has also come in. Westgate and the MGM Mirage have it at 74, while BetOnline also has it at 74 and Pinnacle Sports has it at 73.5.

A number of establishments reported receiving the majority of bets on Oregon, such as William Hill, which said 72 percent of all money wagered is on the Ducks as of Sunday night.

The money line has Oregon around minus-210 as of Monday, meaning a bettor would wager $210 to win $100 on the Ducks winning straight-up.

Check out prop bets from Bovada (online only) below.

Team to Receive 2nd Half Kickoff

Team to score first in the game

The first score of the game will be

The first score of the game will be – Exact Outcome

Will there be a score in the first 4 mins 30 secs of the game?

Will there be a score in the first 5 mins of the game?

Will there be a score in the first 4 mins of the 2nd Quarter?

Will there be a score in the first 4 mins of the 4th Quarter?

Team to score the first 10 Points in the game

Team to score the first 20 Points in the game

Will either team score 3 unanswered times in the game?

Will a special teams or defensive TD be scored?

Team to score the longest touchdown in the game

The longest touchdown score in the game will be

The shortest touchdown score in the game will be

Team to score the longest successful Field Goal in the game

Will the game go to Overtime