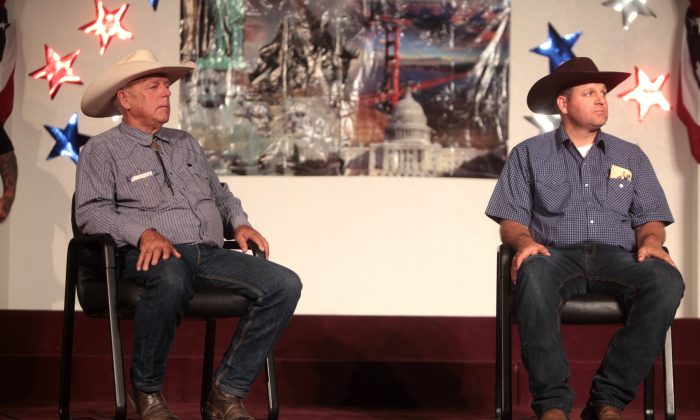 For several days now, a small group of armed men have occupied an office of the National Wildlife Refuge in southeastern Oregon, 300 miles from Portland. They are demanding the “return” of land from the federal government to the American people, and leniency for two ranchers convicted of arson on federal lands.

By chance or by design, the siege overlapped with President Obama’s announcement of a sweeping executive order to restrict the unlicensed sale of guns and enforce background checks for gun buyers—measures widely decried by gun ownership advocates on the right.

The Oregon protesters are led by the sons of Cliven Bundy, a Nevada rancher who in March and April 2014 precipitated an extended stand-off with federal agents over unpaid grazing fees on federally owned land. That episode drew the approval of prominent conservative pundits, which in turn encouraged scores of protesters to rally to Bundy’s defense, and identified his clan as martyrs and ideologues in the re-birth of America’s anti-government militia culture.

Shortly after the occupation of the wildlife center, Cliven’s son Ammon Bundy, the spokesman of the militia, set up a new Twitter account (now suspended). Identifying his group as #CitizensforConstitutionalFreedom, he began laying out his principles.

But these pronouncements aside, he’s given very little further detail on his aims, identifying no obvious exit strategy. And with his call for other militias to join the rising, Ammon Bundy may have initiated one of the thorniest domestic challenges of President Obama’s final year in office.

With his call for other militias to join the rising, Ammon Bundy may have initiated one of the thorniest domestic challenges of President Obama’s final year in office.

So where did the militia movement come from—and why has it suddenly come back?

There is of course a long history of distrust towards the federal government in America, one of which the militias of recent decades are acutely aware. Drawing on anti-Communist organizations of the 1950s and the paranoia of the Cold War, militia culture grew towards a fever pitch in the 1980s and 1990s. Novels such as 1978’s “The Turner Diaries” spun myths about the condition of American modernity that provided both ideas and inspiration to violent and unstable white supremacist movements. Many of the same ideas were presented to the wider public in less political and racist terms in hugely popular films, among them “Red Dawn” (1984).

The tragedy and incompetence of the security agencies’ responses to the sieges of the Weaver family on Ruby Ridge, Idaho (three deaths, August 1992) and the Branch Davidian compound in Waco, Texas (76 deaths, April 1993) only confirmed to many patriots that the government was willing to pursue unconstitutional methods to attack liberty-loving, gun-owning religious communities, and political conservatives.

But the popularity of this newly radicalized “paranoid style” came to a sudden halt on the second anniversary of the burning of the Waco compound, when Timothy McVeigh and Terry Nichols bombed a federal building in Oklahoma City in what was then the most significant terrorist incident in American history, killing 168 people.

One year later, the siege of the Montana Freemen seemed like a last hurrah for militia culture. Its peaceful conclusion suggested that security agencies had learned the lessons of earlier disasters, and were now willing to engage with armed patriots in a manner that would both deny them martyrdom and ensure public safety.

But now the Bundys’ invasion of the wildlife sanctuary has announced that militias are back. Their popularity began to grow again after President Obama was first elected, as commentators on the radical right began to wonder whether conservatives might ever regain power. Many among their number began to speculate how best to survive or resist what they thought a perverse and illegitimate new direction in American culture.

Increasingly, they turned to websites such as survivalblog.com and the survivalist novels and manuals of James Wesley Rawles, a bestselling Penguin author whose website claims more than 320,000 hits per week.

In 2011, Rawles began to promote the evacuation of religious conservatives to the “American Redoubt,” a territory covering several states in the Pacific northwest. As I was told by several of my interviewees during fieldwork in Idaho, several thousand people have heeded his call. Many will have been shocked by the horrors of the Planned Parenthood videos, the Supreme Court’s recent ruling on same-sex marriage, and the possibility of an invasion of Muslim refugees.

And the number of migrants to the Redoubt could increase dramatically now President Obama has issued his executive order on gun control, which sidesteps the Congress to limit freedoms that many believed were guaranteed by the Second Amendment.

So it’s perhaps not especially surprising that the latest Bundy stand-off is taking place in the Pacific northwest, nor that it is happening now. What may be more surprising is that the Bundys and their supporters are moving away from some of the old militia movement’s fundamental tenets.

The new coalition is broad and ideologically diverse, and its principal spokesmen explicitly repudiate racism. Some of its leaders promote the goal of a theocratic society: Rawles’ Penguin bestseller, “How to Survive the End of the World as We Know It” (2010), argues that the Ten Commandments provide the most secure basis for society. Other leaders are emphatically political: the III Per Cent societies promote a particular libertarianism that justifies physical force only in self-defense.

Notably, the Oregon occupation is not being supported either by survivalblog.com or III Per Cent leaders, and it may represent the Bundys’ jockeying for position in the intensely competitive world of anti-government activism. But Ammon Bundy represents the breadth and innovation of these new interests. His new Twitter account evidences respectful engagement with at least one self-described “Afrocentrist”:

One irony of the occupation may be to demonstrate that the militia movement is turning its back upon racism—even as the government’s lack of immediate armed intervention fuels fears that its response may be racist.

That suggests that #OregonUnderAttack could be the first significant example of a new militia ethos in action—one that could potentially reach across racial divisions to enable a broader discussion of constitutional issues as they affect all Americans. But the “double standard” argument over the authorities’ tentativeness shows that there’s still a way to go—as did a New York Times interview in which the elder Bundy wondered aloud if black Americans were better off under slavery.

Meanwhile, Twitter commentators have played upon the rural background of the Oregon militia to deride its members as ‪#YallQaeda—yet the aspirations of #CitizensforConstitutionalFreedom for political change in America go far beyond the complaints about agricultural zoning that supposedly began the occupation.

The invasion of the wildlife sanctuary may demonstrate the power of social media to do for American militia culture what Facebook and Twitter contributed to the Arab Spring—even though Ammon Bundy’s most useful asset may be President Obama’s increasingly hard-line moves against guns.

Crawford Gribben is a professor of early modern British history at Queen’s University Belfast in the U.K. This article was previously published on TheConversation.com