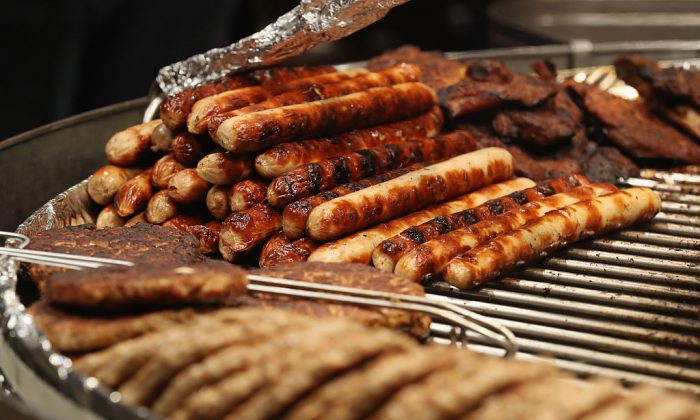 Sausage is seen in this file photo. An Oregon man threw poisoned sausage to dogs, a judge said this week. He was sentenced to probation. (Photo by Sean Gallup/Getty Images)
US News

An Oregon man convicted of trying to kill his neighbor’s dogs by poisoning their sausage has been sentenced to only probation.

Michael Lynch, 77, wanted to harm the animals because he was enraged over their constant barking, according to police investigators.

Lynch’s sentencing was not only for trying to kill the dogs, but also recklessly endangering the dogs’ owner Richard Schmidtke, who said he handled some of the poisonous meat when he took it from the mouth of one of the dogs. Schmidtke ended up on a ventilator at an urgent care clinic because of that contact.

Schmidtke stood up in court and said Lynch has “absolutely no respect for what is socially acceptable, no moral compass,” reported The Oregonian.

He added, “What kind of person stoops so low as to poison animals? That’s unconscionable to me.”

Walker warned Lynch not to violate the probation terms.

“If I think you are doing anything to violate the law, I won’t hesitate to issue a warrant, have you arrested, and put you in jail,” Judge Walker said in court Wednesday, reported KATU.

“You’re gonna sit in jail two weeks before I even see you and we’ll talk about how much time you’re gonna do after that. Okay?”

Veterinarians found a ricin-like poison in the dogs’ stomach, but the dogs survived the attempted poisonings. Lynch’s neighbor testified that he saw Lynch throwing meat into Schmidtke’s yard, and police officers testified that he at one point told them that he would “handle” the barking dogs “on his own.”

According to The Oregonian, police searched Lynch’s home and found castor beans—which naturally produce ricin—and a jar labeled as containing botulism, according to a probable cause affidavit.

A $400,000 civil lawsuit filed by Schmidtke against Lynch is headed toward trial.