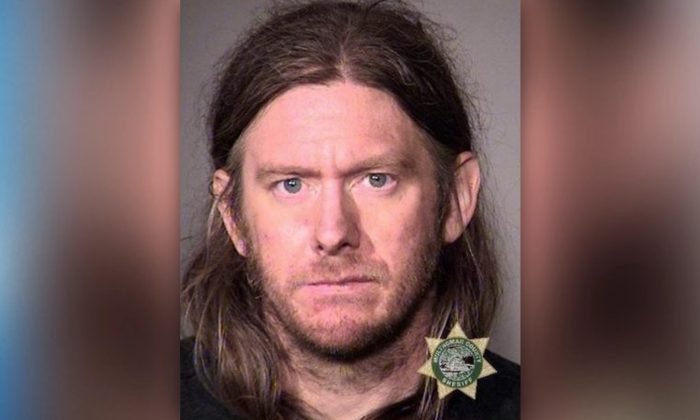 Ryan Bishop was arrested after allegedly breaking into a property in Gresham, Oregon, on July 7, 2019. (Multnomah County Jail)
Crime and Incidents

Police in Oregon said a man broke into a Gresham home with his cat “Spaghetti,” before performing several odd acts including dressing himself in a woman’s Christmas onesie.

The man also allegedly brewed up some coffee during the July 7 intrusion into the house, KOIN 6 News reported, ate a cupcake, and drank some beer.

“This is my first house, this is my actual property and someone came in and I guess couldn’t figure out how to open a door and kicked a hole in the wall to crawl through to kick a hole in the closet, and then go make themselves a cup of coffee?” homeowner Timothy Smith told KOIN 6 News. “It blows my mind. It really, really does.”

According to Fox 12 Oregon, police responded to a call shortly before 4 p.m. Sunday regarding a possible burglary in progress.

The homeowners were cited by KATU as saying that when they returned to their house on Sunday afternoon, they heard something moving around in their crawl space. The couple said when they looked inside, they saw a cat wearing a shirt. They also heard sounds leading them to suspect someone else was in the crawl space and called 911.

When officers arrived, a man wearing the owner’s onesie came out from the crawl space, the report said. The homeowner told KOIN 6 News that the suspect “took off all his clothes and tossed them in the washer and dryer” before dressing himself in his fiancee’s pajamas, which were “like a zip-up, it’s got little snowball things that bounce off of it.”

The suspect has been identified as 38-year-old Ryan Bishop, CBS Austin reported. He was booked in the Multnomah County Jail on charges of first-degree burglary, first-degree criminal mischief, and third-degree theft.

The cat initially refused to come out of the crawl space, prompting Animal Control to respond to the scene. KOIN 6 News reporter Amy Frazier later posted a video of the cat, writing, “Spaghetti the cat is now safe after bizarre Gresham burglary!”

Smith told KOIN 6 News he and his fiancee hadn’t yet settled into their new home when “someone came in and ruined the sanctity of my own home before I was even moved in.”

He added that his fiancee doesn’t feel safe in the residence and he feels “like a part of my soul has kind of been destroyed.”