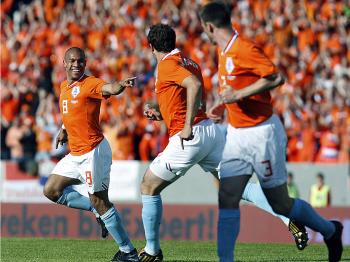 By Peter Valk
Print
WOERDEN, Netherlands—Orange fever is on the rise in the Netherlands in the build-up to the World Cup soccer tournament in South Africa. The Dutch team began a secluded training camp on Monday after coach Bert van Marwijk announced a preliminary training roster of 30 players.

Lines of journalists and children were waiting for hours to catch a glimpse of the players that arrived one by one in the training complex in Hoenderloo.

The most striking aspect, in the preliminary selection, is the absence of veteran Dutch forward Ruud van Nistelrooij. The 34-year-old forward has had a successful career as striker for PSV Eindhoven, Manchester United, Real Madrid, and is currently playing for HSV Hamburg. He played 64 international matches for the Netherlands, in which he scored 33 goals.

“The way I see it is that even though Ruud is fit now, he had too little time to get back to his required, old level after his lengthy knee injury,” van Marwijk said.

Before June 1, seven more names will be crossed off the roster leaving a definite selection of 23 players going to South Africa.

In potential, the Dutch team is a serious candidate for the title with arguably one of the world’s most spectacular attacking lineups. World class players feature such as Arsenal’s Robin van Persie, Bayern Munich’s Arjen Robben, and a creative midfield with Inter Milan’s Wesley Sneijder and Real Madrid’s Rafael van der Vaart. The Dutch rank fourth in the FIFA World rankings.

The Dutch made it to the finals of the World Cup in 1974 and 1978, in which they were beaten by Germany and Argentina respectively. They played soccer defining a style called “total football.”

“Total football and its attacking pressure are truly spectacular. It places great demands on individual and team tactical excellence. An absolute prerequisite, to master such a team tactical aspect, is that all the players possess a positive mentality, including the substitutes,” said former Dutch coach Rinus Michels to www.bettersoccermorefun.com. Michels won the European Championship with Netherlands in 1988.

At times when some of these requirements were missing, it led to underachievement and often the Dutch failed in big games, despite obviously being the superior team. This, of course, caused national soccer traumas in the Netherlands.

In April, Nol de Ruiter who was the assistant coach during the World Cup in Italy in 1990, published a diary with a few chapters narrating his tournament experience.

The chapters give an insight into the possible root causes of the tournament that ended in a big disappointment. De Ruiter calls former coach Leo Beenhakker an “air balloon”, but also criticizes former star players like Ruud Gullit and Ronald Koeman for their lack of moral values and discipline.

At the book presentation, De Ruiter said he hoped the story can serve as a lesson for the current Dutch team.

Coach van Marwijk succeeded Marco van Basten in 2008 and has been coach of Rotterdam Feijenoord, with which he won the UEFA Cup in 2002, and Borussia Dortmund.

He is a level-headed and conservative coach, good in balancing relations with the press and players. He might well be the right man in the right place.

Star players such as Wesley Sneijder, Arjen Robben, and Mark van Bommel all played a prominent role in the success of their clubs this season.

On a good day winger Arjen Robben’s dribbling can pierce through any defense but he is injury prone.

Attacker Robin van Persie, a former “enfant terrible” with a golden technique reminiscent of the great Dennis Bergkamp, was injured most of the year but recently resumed playing for Arsenal.

The weakest point by far in the Dutch team is the defense, which doesn’t come as a surprise in a country in which defense is considered a dirty word.

Most Dutch defenders are, in fact, re-trained midfielders and attackers. But the Dutch think that as long as they score one more goal than their opponent, defense doesn’t matter much.

Times have changed and so has soccer, but the Dutch public remains extremely demanding as it requires the team to not only win but also to win beautifully. To win with a defensive playing style as advocated by Inter Milan’s coach Jose Mourinho is unthinkable for the Dutch, regardless of the result.

Meanwhile, the Dutch people are hungry for success after the national league has been de-valued, lost its charm, and only plays a marginal role in competitions like the Champions League.

Dutch clubs cannot compete with the high salaries paid in the Spanish, Italian, German and English leagues. The result is that most promising Dutch players leave the Netherlands even before they have matured.

On the other hand, the vision of Dutch coaches such as Johan Cruijf and Louis van Gaal, and to a lesser extent Guus Hiddink have heavily influenced foreign teams such as Barcelona. Arsenal’s coach Arsene Wenger is said to be a big fan of the Dutch total football philosophy.

Under normal circumstances, patriotism is seldom expressed and in general viewed with suspicion in the Netherlands. This philosophy goes out the door when the Dutch national soccer team plays in the European or World Cup.

In these times, the streets in the Netherlands turn orange, the color of the Royal Dutch house, and the Dutch become a people gripped by soccer fever.