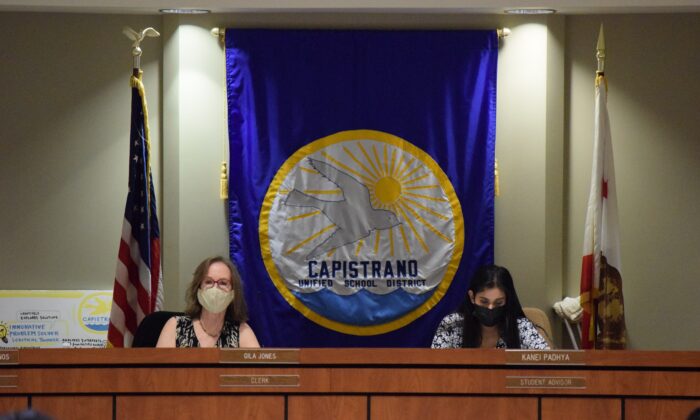 The Capistrano Unified School District is calling on the state to increase its base rate of funding for its schools as it faces declining enrollment and a projected funding shortfall.

The Capistrano Unified Board of Education projected enrollment would drop by 812 students from the current school year, putting the district at 41,942 for the 2022–23 school year, according to school officials during a May 18 board meeting, where the upcoming year’s budget proposal was being heard.

As one of Orange County’s largest school districts, the Capistrano Unified has seen a decline in enrollment in recent years due to decreasing birth rates, according to the district’s budget proposal.

Because the amount of state funding available is dependent on average attendance and enrollment, the district’s funds will dwindle if fewer students are coming in—though, for now, it’s unclear what the total budget would look like.

Board member Gila Jones called the proposed budget a “starvation budget,” saying the budgets are “done in such a way that it only allows for … salaries and books, and heating and lighting. There isn’t any extra money.”

During the meeting, the board reiterated its support for the district’s “Raise the Base” campaign, which calls on the state to raise the minimum funding received by each public school for each student it serves.

The increases in per-student funding would not require an increase in state or local taxes and only require “continuing the investments [the district has] made with state and federal covid dollars,” according to the campaign website.

Last month, the board adopted a resolution in support of the campaign and encouraged parents and the district community to support California Assembly Bill 1614—introduced by Assemblyman Al Muratsuchi (D-Torrance)—which would also increase educational base funding.

Capistrano Unified has faced underfunding issues for almost a decade after the state establish a funding formula based on average daily attendance and prioritizing extra funding for high-need students, including foster youth and students from low-income families.

Because of these criteria, Capistrano Unified received less annual state funding than other districts in the county, despite the fact that it serves more students.

According to Education Data Partnership, the district had an average daily attendance rate of 85 percent for the current school year, with 98 foster youth students, and 13,047 low-income students.

Capistrano Unified received $12,701 per student in 2021 while the average amount received by school districts in the state was $15,696 per student.

During the meeting, the board also voted 4–1, with one abstention, to place a $98 million bond measure on the November ballot. The funds from the measure would cover construction updates to the 50-year-old Dana Hills High School’s seismic structure.

Jones said that the bond is needed because the construction project would be otherwise impossible with the district’s current financial capacity.

“In order to do the construction work that we need to do in this district, we would have to stop educating kids—and even at that it would take us many years to do the construction we need because the needs are so vast, and the amount of money we get from the state is so small,” she said. “It’s a horrible way to finance schools but that is what the state of California tells us we must do. They do not provide any money for it.”

Capistrano Unified’s enrollment and funding decline reflect a larger trend in enrollment decline across the state.

Earlier this week, California’s largest school district, the Los Angeles Unified, released a report that showed the district’s enrollment is expected to drop by 30 percent in the next decade, forcing its officials to make a series of tough decisions on whether to close or downsize some schools and how to balance funding shortage and teacher shortage for in-person instruction.

A spokesperson for Capistrano Unified did not return a request for comment by press deadline.