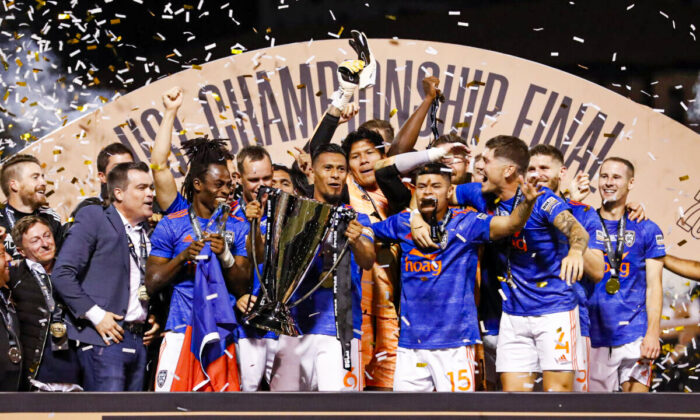 In its first final in eleven seasons, a most improbable championship season came to fruition, as no one would have imagined that OCSC would even qualify for the playoffs; as they went through an eight-game mid-season slump with one win, five losses, and two draws.

The turnaround happened late in the season after a disappointing three-goal defeat to the Tacoma Defiance when the team decided that they had to “go up” from that point on.

OCSC went on to finish the regular season with five wins to finish second in the Pacific Division with a 15–10–7 record, and a spot in the playoffs.

OCSC began the playoffs defeating the Colorado Springs Switchbacks FC 1–0. OCSC went on to win in an overtime shootout, 6–5, in a scoreless affair against the Oakland Roots. In the conference finals, they managed to advance through another OT shootout over San Antonio FC 1–1 (5–3).

Chaplow and the team concentrated on team defense from all eleven players, and incorporated the slogan for all levels of the club of “Job’s not done!”

“To be honest the whole team defends,” said central defender and hometown hero Michael Orozco from Orange County, California. “We’re hard to break down because of the commitment that every single player has.”

That was evident in the first half as goal scorer Damus came back in defense to clear the ball from danger in front of the goal.

OCSC’s defense is anchored by goalkeeper Rakovsky, who formerly played in the German Bundesliga for FC Nurnberg.

In 2012, the German Football Administration award Rakovsky the Fritz Walter Medal for being a top youth player.

Rakovsky was tested throughout the match. He made a great save on a penalty kick in the 19th minute; as OCSC defender Kevin Alston took down Rowdies’ Yann Ekra (Ivory Coast) while trying to prevent Ekra from receiving a pass into the heart of the box.

Rakovsky read the penalty shot correctly, taken by Rowdies Captain Sebastian Guenzatti (USA), and dove to his right to parry the ball away.

“Obviously Pat is our last line of defense,” said Coach Chaplow. “We all count on him to pull out the moments when it’s needed.”

The Rowdies had controlled the first 25 minutes of the game but failed to score. Their attacks lead to several shots, mostly from the top of the box, that sailed high of the goal.

OCSC was content on being patient for a mistake from the Rowdies.

At the 25-minute mark, Rowdies goalkeeper Raiko Arozarena (Cuba) began possession distributing to the left wing-back. The ball was pushed forward and returned to the box to central defender Forrest Lasso (USA). Lasso then switched the field across to the right defender Jordan Scarlett (Jamaica). With pressure from the OC forwards, Scarlett sent a square pass across the middle of the box unaware of OCSC forward Dumas, who ran through for a first-touch left-footed shot into the left-center of the goal.

The Rowdies tried to equalize, mostly from attacks by Guenzatti. But was foiled repeatedly, including a great tackle by OCSC defender Brent Richards, and other shots that were saved by Rakovsky.

The 37th minute saw an attack from OCSC up the right touch-line to Eric Calvillo (Palmdale, Ca), who pushed the ball past his defender to cross the ball in front of the penalty spot. Damus touched the ball up in the air and struck a volley as the ball came down. The bouncing shot went by two Rowdies defenders, and Arozarena, to the lower-left corner.

At the end of the first half in the 45th minute, OCSC Mikko Kuningas (Finland) scored on a free-kick located about 25 yards out at the left of center; the shot was bent around the left side, at shoulder height, of the wall and finished just inside the left goalpost for a 3–0 halftime lead.

Regarding the first half, “I think we played really good defense, said Rakovsky. “We had three chances, three goals; and we just have to keep going, keep the clean sheet, and then we win.”

The second half continued with more attacks by the Rowdies and resulted in their only goal by Leo Fernandes in the 57th minute.

Fernandes connected on a loose ball six yards away from the goal that Rowdies’ Steevan Dos Santos had missed from a cross that was cleared up in the air by the OCSC defense.

The Rowdies had made a miraculous comeback, from a two-goal deficit, to win the Atlantic Conference Finals over Louisville FC, in overtime (3–2). However, they were not fated to repeat another come-from-behind victory.

Damus nearly had a hat trick late in the game dribbling past defenders, but Rowdies Arozarena recovered to make an excellent diving save.

Damus won the MVP award and accepted the trophy stating, “the way they favored Tampa tonight, the game is not based on on the favorite. “It’s based on 90 minutes on the field.”

Rakovsky was also deserving of the award as he made numerous big saves to include the penalty kick.

Orozco had said of Rakovsky, “As a human being, he’s a great person, great family man, so he takes that on to the pitch being a leader. He’s always talking to us, communicating what he wants and expects from everybody.”

OCSC’s slogan of “Job’s not done” may rest for now, for they have accomplished their mission in winning the club’s first USL Championship.

Regarding the first half, “I think we played really good defense, said Rakovsky. “We had three chances, three goals; and we just have to keep going, keep the clean sheet, and then we win.”

This matchup was supposed to be a defensive battle.

The Rowdies set the longest streak in league history going nearly 900 minutes without conceding a goal; as GK Evan Louro (USA) had 14 clean sheets. Louro was injured in a victory celebration over Louisville City last week and was out for this match.

The second half continued with more attacks by the Rowdies and resulted in their only goal by Leo Fernandes in the 57th minute.

Orozco had said of Rakovsky, “As a human being, he’s a great person, great family man, so he takes that on to the pitch being a leader. He’s always talking to us, communicating what he wants and expects from everybody.”

OCSC’s slogan of “Job’s not done” may rest for now, for they have accomplished their mission in winning the club’s first USL Championship.