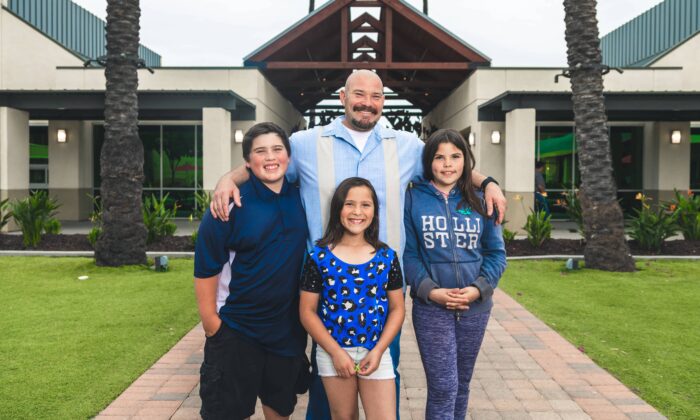 Orange County Rescue Mission Gives ‘A Hand Up, Not a Handout’

SANTA ANA, Calif.—Several years ago, Chuck Pelser’s life hit rock bottom. Heavily addicted to drugs at the time, he had lost his home, and his children were scared and suffering as they witnessed him spiraling out of control. At one point, things got so bad that, despite his love for his kids, Pelser attempted to commit suicide.

The single father of three children was desperate to change his life and the lives of his kids, so he swallowed his pride and moved in with his mother. He told himself that the unstable motel life they had been living was part of the reason things were falling apart around him.

But deep-rooted issues continued to cripple Pelser and his family. He was drowning in debt, consumed by addiction and the life of shame he was leading. He knew his children needed love and stability, but he was simply in over his head. They needed more than he could provide.

“That’s when I finally broke down and fell to my knees,” Pelser said. “I just couldn’t take it anymore. I knew they deserved more from their father.”

Looking for a place to heal and forge a new start, he and the children left their old life behind and moved into the Orange County Rescue Mission (OCRM) Village of Hope.

“It was a smooth transition for the children, but I had to sober up from more than 20 years of addictions. Yet, I was not alone,” Pelser said.

Located in Tustin, California, Village of Hope provides long-term transitional, recuperative, and emergency housing for its residents, who have access to comprehensive services once they’re accepted into the sober-living, faith-based program, including counseling, job training, and medical and dental care, as well as the support and guidance to help them find their way back to health and self-sufficiency.

Families such as the Pelsers can stay together at the village, which provides an opportunity for parents and children to reestablish relationships and routines, share meals, attend school, and receive medical and dental treatment, as well as counseling, all in a safe and stable environment.

“What makes us different is we don’t just provide shelter and food: We provide a whole program to address a variety of uniquely challenging issues that throw peoples’ lives off track,” Jim Palmer, president and chief executive of OCRM, told The Epoch Times.

“Whether it’s because of abuse, neglect, abandonment, divorce, or job loss—all issues that oftentimes lead to addiction—the core issues people struggle with have to be addressed for our residents to be successful after they leave our program. We’re about a hand up, not a handout.”

Pelser was able to utilize child care and tutoring services available at the Village, which allowed him to concentrate on his own work. The children began to thrive, which encouraged him even more. He took parenting classes, and Village staff worked tirelessly with Pelser to improve every aspect of his life.

Each day, Pelser worked on rebuilding his relationship with his kids, and after a while, he began to see hope for his future and that of his family after so many years of struggle and torment.

“My kids finally trusted me again. They felt safe,” Pelser said. “The Rescue Mission didn’t just put a roof over our heads. My children were able to witness the miracle of their father’s transformation to be a man of God.”

Pelser has since graduated from the Village of Hope program and currently has a full-time job at Tustin Mazda, where income and advancement opportunities keep him striving to continue to improve. Having caught up with their studies during their stay at the village, the Pelser children have done well in school and are participating in a slew of extracurricular activities.

“I hope to see all three of my children grow up, go to college, continue to grow in the Lord, and see me as a sober-minded father,” Pesler said of how he views the future. “I plan to share my story with single parents.”

In addition to continuing hardships resulting from the pandemic, Palmer noted that at the core of the issues facing those who come to OCRM seeking help is well-meaning but ill-conceived public policymaking, combined with rampant drug addiction that isn’t readily acknowledged or being dealt with.

OCRM screens nearly 1,000 people per year, and like Pelzer, most struggle with addiction that often results from deeply rooted mental, emotional, or situational issues that must be addressed. Palmer noted that 87 percent of the people they screen self-identify as having an addiction or mental health struggles.

“When considering that half of people who truly have mental health issues don’t know they have an issue, that figure is higher,” Palmer said. “But the real issue for most is substance abuse. We know this because we drug test, and no one is going to come to us and say they have a drug problem when they don’t. It just doesn’t happen.”

Palmer said while there has been a significant movement in accommodation by the government to pay for programs aimed at housing, unless the addiction and mental health issues of those being housed are fully addressed, those programs are doomed to fail.

“Billions of taxpayer dollars are being spent via the federal CARES Act, but really they’re basically creating what we used to call ‘the projects’—housing that HUD funded in other parts of the country,” Palmer said. “They’re taking all these broken people and sticking them in one spot with no resources to address the addiction that caused their homelessness in the first place.

“While the government can fund all the housing it wants, it can’t force participation by the people they are housing in the types of programs necessary for them to escape the cycle of addiction that is plaguing their lives. It’s simply creating a more vicious cycle.”