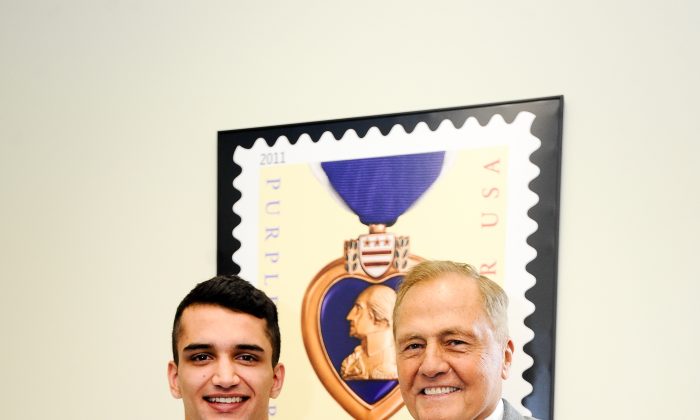 Sen. John Bonacic has secured a $50,000 grant for the Town of Wawayanda Highway Dept. to purchase a plow truck. The grant was secured through the State Municipal Grant Program to help pay for a 2016 Tandem Freightliner truck with snow plow. “One of the basic responsibilities of local government is to ensure that residents have safe roads to travel on,” said Orange County Legislator Melissa Bonacic, who represents the Town of Wawayanda.

The Town of Deerpark has obtained $75,000 to resurface a portion of Franke Road through the efforts of Sen. John Bonacic. Included in the 2015-2016 state budget as part of the State Municipal Grant Program, the grant will be used to help resurface a three-mile stretch of Franke Road that is in serious need of work. “A project like this serves multiple purposes. Not only will it save the taxpayers’ money, but will also ensure motorist safety,” Bonacic said.

Orange County Executive Steven M. Neuhaus helped to deliver meals to homebound seniors in Cornwall as part of the Office for the Aging’s Big Wheels Deliver Meals Program on May 6. Deputy County Executive Wayne Booth, District Attorney David Hoovler, and Office for the Aging Director AnnMarie Maglione participated in the effort. Neuhaus encouraged volunteers for the program. “Even if you can volunteer only once a month, it makes a difference.” Each day, Orange County’s Home Delivered Meals program provides fresh, nutritionally-balanced meals to approximately 700 people at senior centers and personal homes. While delivering meals, volunteers check on the seniors, many of whom are homebound, and enjoy the volunteers’ daily visit.

Legoland in Talks for Possible Theme Park in OC

Legoland executives are talking with some landowners in the county for a third theme park in the United States, reported the Times Herald-Record. With parks in California and Florida, the toy company seeks a site within an hour of New York City. Neuhaus told the Record that Legoland is expected to make a decision possibly at the end of June and to open the park in 2019. Although Neuhaus declined to name the properties, he said he is “cautiously optimistic that Orange County will land the project.” The site would be similar to the Florida Legoland with a waterpark and hotel.

The Enlarged School District of Middletown was a recipient of a $20 million grant in the Race to the Top program. President Obama noted Middletown’s achievement in a recent statement posted on the school district’s website: “For instance, in Middletown, New York, which won a Race to the Top-District grant in 2012, the district has implemented a blended learning model, integrating technology into the classroom using a digital platform for the delivery of academic content and relying on teachers to use performance data to guide instruction and learning. Middletown has seen real progress—students in blended classrooms out-performed those in non-blended classrooms by as much as 45 percent in reading and 56 percent in math, and surpassed their growth targets by 18 percent in math and 36 percent in reading.”

NRC Requires Indian Point to Take Another Look at Accidents

Attorney General Eric Schneiderman on May 6 applauded a decision by the Nuclear Regulatory Commission to conduct another assessment of the impacts caused by severe accidents at the Indian Point nuclear power facility and potential upgrades needed to protect the public against accidents. Schneiderman said that “millions who live and work near Indian Point deserve a fair assessment of upgrades needed to protect them from severe accidents. The Commission’s unanimous decision reversed an earlier administrative ruling, and found that NRC staff’s analysis of severe accident minimization at the Indian Point facility violates the National Environmental Policy Act.

West Point Cadet Angelo Matz, a first-year cadet whose home is in Port Jervis, visited the state senate on April 26 and was greeted by Sen. Bonacic as part of the NY Senate’s 2016 West Point Day. Bonacic spoke with Matz about his experience so far at the Academy. The cadet’s grandfather was former NY State Senator Arthur Gray. Senior Academy personnel were also on hand, including the Superintendent of the United States Military Academy, Lieutenant General Robert Caslen.

The Orange County Legislature voted unanimously on May 5 to provide SUNY Orange with about $1.4 million in capital funding to match state funding. The college requires an overhaul of its outdated technology infrastructure, storage, and systems. Total funding of $2,824,250 will go toward an upgrade to bring the IT infrastructure to a more reliable and robust place. “Our network stability is a major concern,” said SUNY Orange President Dr. Kristine Young. “Our servers and storage systems are aging and we are suffering from a significant lack of server space for sufficient data storage and backup.” Young said the upgrade is part of the college’s strategic plan. Upgrades tied to this are renovation of online student records software, improvements in the college’s data center, updates to phone and voicemail systems, and a content management system to enhance the college web site.