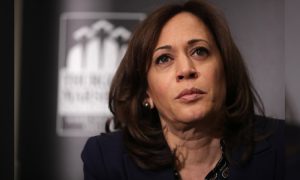 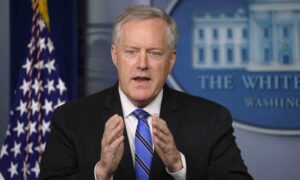 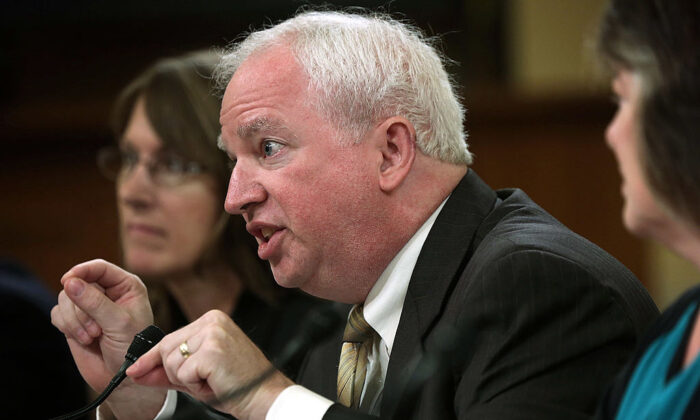 Despite the backlash that has followed, Dr. John C. Eastman said, “I’ve been in the crosshairs for far too long to succumb to such pressure.”

“But a lot of people who agree with me, or who acknowledge that my arguments are perfectly credible and serious, have expressed great fear in saying so, for fear that the mob turns on them,” Eastman told The Epoch Times on Aug. 19.

Aside from Harris’s citizenship, the editorial has also become about how the university and public react to scholarly inquiry, Eastman said.

In his Aug. 12 editorial, Eastman—a constitutional law expert based in Orange, California—analyzed the 14th Amendment’s citizenship clause to raise questions about Harris’s eligibility to run for the office.

Before “cavalierly” accepting Harris’s eligibility, “we should ask her a few questions about the status of her parents at the time of her birth,” he wrote.

The backlash from colleagues and critics was swift and harsh. Members of the Chapman faculty condemned the remarks, calling them “poorly argued, inaccurate, and racist” in a Change.org petition calling on the university to reaffirm its commitment to diversity and inclusion.

The petition stated that the opinion piece reignited “racist birtherism by falsely claiming Kamala Harris is ineligible” to become vice president. As of the morning of Aug. 20, 415 people had signed the petition; its goal is 500 signatures.

Newsweek also issued a written apology on Aug. 14—not for publishing Eastman’s editorial, which they called a “minority legal argument,” but because “this op-ed is being used by some as a tool to perpetuate racism and xenophobia.”

“The op-ed was never intended to spark or to take part in the racist lie of Birtherism, the conspiracy theory aimed at delegitimizing Barack Obama, but we should have recognized the potential, even probability, that that could happen,” Newsweek wrote.

Eastman told The Epoch Times he was surprised by the backlash. He has been publicly questioning orthodox views of how to interpret the 14th Amendment for decades, he said.

“I have been pressing this argument consistently for nearly 20 years, in a wide variety of contexts … long before Senator Harris was tapped as a VP nominee. I think it would be hypocritical of me not to raise it in the current context,” Eastman said.

Eastman said the reaction of “the virulent anti-Trump Twitter world” was to be expected, but he didn’t think “serious scholars and news journals would parrot the Twitter mob.”

“Quite frankly, [this] has become a common tactic to shut down opposing viewpoints. It is despicable, and we really ought not to countenance it,” he said.

“The charges of racism are all unfounded,” he wrote.

“Indeed, the actual racism … is to be found among those who think Senator Harris should somehow be immune from such inquiries because she is partially black. That is really an intolerable double standard, but in today’s ‘woke’ culture, it is increasingly becoming the norm.”

Chapman University President Daniele Struppa said in an Aug. 17 statement that “the university is not responsible for the ideas of its faculty” and that as president, he would “neither endorse them nor refute them.”

But he defended Eastman’s right to free speech.

“The strength of a university comes in its commitment to free speech and to academic freedom. We cannot simply pick and choose when to support free speech,” he said.

“Indeed, if anyone in a position of authority were to publicly criticize faculty work, it would create a dangerous chilling effect on the culture of academic freedom that defines a university.”

Struppa added that he was equally committed to “a diverse and inclusive community at Chapman. One that is stronger than the voice or act of an individual.”

Eastman gave an example of one faculty member who asked him “to reconsider the article.”

“But neither he nor any of the others have studied the historical materials at all, much less to the extent I have,” Eastman told The Epoch Times.

It’s “easier for them just to claim that I am wrong than to actually confront the significant scholarly work that backs up my contention.”

He encouraged other scholars to have courage to continue asking tough questions, noting “how important it is for scholarly integrity and the search for truth to be able to have such conversations.”

“A climate in which the search for truth no longer is possible … will cause long-term harm to our country,” he said.

“But if, once we get beyond the particular partisan silliness of the season, I have managed to get people to pay closer attention to the constitutional requirements of citizenship and reasons therefore, that will be to the good.”