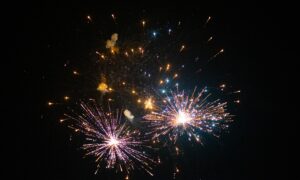 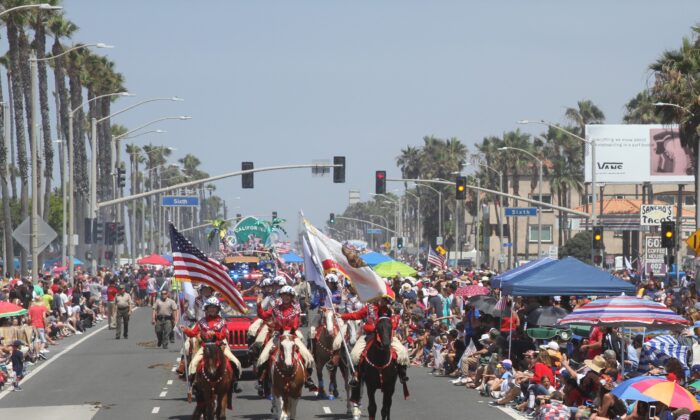 NEWPORT BEACH, Calif.—On July 8, 1776, the first public readings the Declaration of Independence were held in Philadelphia’s Independence Square heralded by the ringing of bells and band music.

One year later, on July 4, 1777, Philadelphia marked Independence Day by adjourning Congress and celebrating with bonfires, bells and fireworks.

The annual custom eventually made its way to other towns, large and small, and the day was marked with processions, speeches, picnics, competitions, games, military displays and of course, fireworks.  These observations throughout the nation became even more prominent at the end of the War of 1812 with Great Britain.

From his home at Monticello, a gravely ill Thomas Jefferson sent a letter in June of 1826 to Roger C. Weightman, the eighth mayor of Washington, D.C., with regrets that he could not attend the 50th anniversary of the Declaration of Independence.  It was the last document Jefferson ever wrote.

In it, Jefferson wrote about the Declaration of Independence: “May it be to the world, what I believe it will be…the signal of arousing men to burst the chains…and to assume the blessings and security of self-government.  That form, which we have substituted, restores the free right to the unbounded exercise of reason and freedom of opinion.  All eyes are opened, or opening, to the right of man.  …For ourselves, let the annual return of this day forever refresh our recollections of these rights, and an undiminished devotion to them.”

The tradition continues this year throughout Orange County, where last year’s celebrations were largely hampered by COVID-19 restrictions. Here’s what’s happening throughout the region:

Cypress Salute to America
Where: Cypress College, 9200 Valley View Street
The July 2 drive-up event, which runs from 6:30 p.m. to 9:30 p.m., includes live music by Electric Vinyl and fireworks display. Registration is required. No concessions will be available.

Huntington Beach Fourth of July Celebration and Fun Run
The biggest Fourth of July Parade in Orange County has been modified again for 2021. A parade caravan will travel on Independence Day through Huntington Beach neighborhoods in the morning. Also scheduled is a Pier Plaza Festival with vendors, a Ferris wheel, and a 12,000- square-foot beer and wine garden. The Surf City 5K run will feature staggered start times on a course along Goldenwest and into Central Park. Fireworks over the ocean will conclude the day’s activities.

Irvine July 4 Elton John Tribute with Pacific Symphony
Where: Five Point Amphitheatre, 14800 Chinon Ave.
Enjoy a live performance by Craig A. Meyer as “Almost Elton John”, plus patriotic music from the Pacific Symphony’s salute to the Armed Forces and a fireworks display. Show starts at 8 p.m.

Laguna Beach City Fireworks Show
Where: Monument Point at Heisler Park
Fireworks begin at 9 p.m. City trolleys will operate under a modified schedule. The Coastal Route will run from 9:30 a.m. to 10 p.m. and Canyon Route from 8:30 a.m. to 10 p.m.

Laguna Niguel July 4th Week of Festivities
Where: Crown Valley Community Park, 29751 Crown Valley Pkwy.
An Independence Day flyover at 6 p.m. will feature six acrobatic airplanes, which will loop around Laguna Niguel above Crown Valley Parkway from the 5 Freeway to the Pacific Coast Highway and over city hall. A digital fireworks display will stream on Facebook beginning at 7 p.m.

Lake Forest Fourth of July Concert and Fireworks Show
Where: Lake Forest Sports Park, 28000 Rancho Pkwy.
A live concert is set to be performed by Yachty by Nature from 6:30 p.m to 10 p.m., followed by a fireworks show at 9 p.m. Food trucks will be on site.

Los Alamitos Drive-Up Fourth of July Fireworks Spectacular
Where: Los Alamitos Joint Forces Training Base
The Joint Forces Training Base will be allowing cars to enter at the Lexington and Orangewood Gates to park on-site and enjoy the annual fireworks display from the comfort and safety of their car. Gates open at 7:15 p.m. Fireworks begin at 9:00 p.m. Reservations required.

Mission Viejo July 4th Fireworks Display
Where: Olympiad between Marguerite and Melinda
The street fair is cancelled for 2021, but fireworks will begin at 9 p.m.

48th Annual Mariners Park Independence Day Celebration
A parade begins at 10:30 a.m. on the corner of Commodore and Mariners Drive. It will be followed by a celebration with live music, free entertainment, a more from 11 a.m. to 1:30 p.m. There will also be lawn games, a puppet show, and food trucks.

Independence Day on the Back Bay
Where: Newport Dunes, 1131 Back Bay Dr.
Guests will enjoy a weekend full of events and fun including swimming, watersports, an inflatable water park, and more. Fireworks show on 4th of July. Ticketed event.

San Clemente Fourth of July Fireworks Show
Where: San Clemente Pier.
There will be a 9 p.m. fireworks show from the pier.

Tustin Fourth of July: An All American Blast-Virtual Event
Where: Tustin High School Stadium
Fireworks begin at 9 p.m. A livestream will begin at 8:30 p.m. at www.Tustin4thOfJuly.com with a radio broadcast of music on 91.7 FM. The high school will remain closed. If the view permits, families can also watch the show from home.

Villa Park Fourth of July Parade
Where:  Villa Park High School, 18042 Taft Ave.
Villa Park will roll out the Stars on Parade masked strolling and rolling event July 4. Participants are being encouraged to decorate their bike, scooter, wagon, skateboard, stroller, or scooter and join in the fun. Motorized vehicles will be permitted but will park on Taft and enter the group after walkers have passed. Lineup begins at 8:30 a.m.