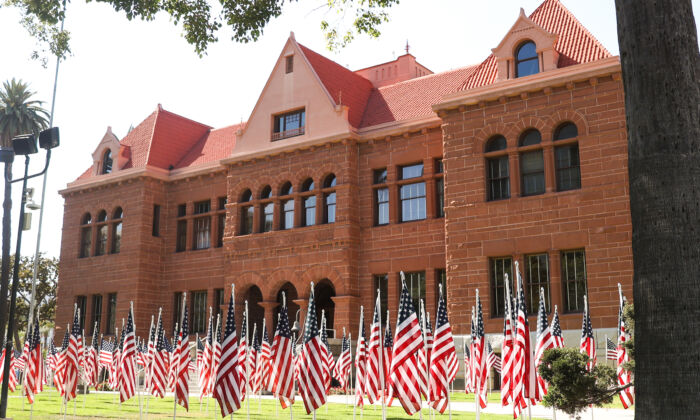 Hundreds of American flags are on display on the front lawn of the Old Orange County Courthouse in Santa Ana, Calif., on June 13, 2022. (Julianne Foster/The Epoch Times)
Orange County Community

Surf City Flags, a family-owned business in Huntington Beach, has been serving its community and service members with custom wooden American flags, and will continue to on Flag Day.

Brett Siciliano and his Great Uncle Lewis “Louie” Barnett founded Surf City Flags to honor the nation’s veterans. After Louie’s passing at age 94 in 2021, Brett continues the company in memory and dedication to his uncle’s service in the U.S. Army.

“The flag stands for freedom for all Americans and people all over the world,” Brett Siciliano told The Epoch Times in an email. He quoted Louie saying, “with great freedom, comes great responsibility.”

Siciliano and his uncle have supported veterans and service members in Orange County by gifting them wooden flags, financed through generous donations. In their six years, they have made flags for Huntington Beach’s residents, police and fire departments, and senior center.

The City of Anaheim celebrated National Flag Day with its 27th Annual Parade featuring its 3rd annual decorated vehicle procession on Sunday, June 12. Visitors were given free flags while enjoying a BBQ lunch and cupcakes. The City of Irvine celebrated early at the Irvine Regional Park and had a Flag Day concert on Friday, June 11.

In Santa Ana, hundreds of American flags are currently on display on the front lawn of the historic Old Orange County Courthouse.

Lake Forest will hold a Flag Day celebration on Tuesday, June 14 in Veterans Park. There will be a brief flag-raising ceremony at the newly installed flagpole at the Veteran’s Memorial before the ceremony begins at noon.

National Flag Day was established in 1949 when U.S. President Woodrow Wilson issued a proclamation to honor of the adoption of the first official U.S. Flag.

The Flag Act of 1777 adopted on June 14 designated the first flag’s design to have thirteen stripes—of red and white alternating colors—with thirteen stars of the union in a blue field.

Nicknamed “Old Glory,” the American Flag’s design now has 50 stars for the 50 states in front of a blue background representing justice for all, with 13 stripes—red to represent the courage and blood of those who sacrificed themselves for this country and white to signify purity from the influence of other countries and our ability to hold true to American ideals.