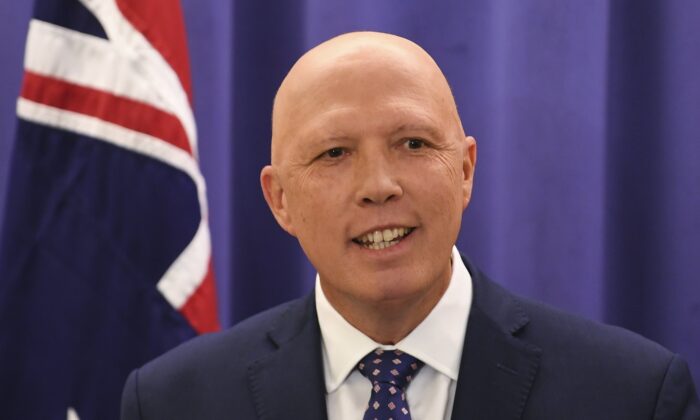 Newly elected leader of the traditionally centre-right Liberal Party Peter Dutton speaks to the media after a party room meeting at Parliament House in Canberra, Australia, on May 30, 2022. (AAP Image/Lukas Coch)
Australia

Opposition Leader Peter Dutton will skip the Albanese government’s jobs and skills summit, which the Coalition has branded a “stunt” and a “talkfest.”

The summit—a Labor election promise—will aim to address Australia’s economic challenges and will bring together about 100 representatives from the business, union, and community sectors.

Liberal Deputy Leader Sussan Ley says no one from the coalition, including Dutton, who was invited by the government, will go.

“It’s just a stunt,” she told Sky News on Wednesday.

“All this is going to be is a talkfest designed to look after union mates.

“The Labor Party dropped the invitation to the media … they briefed out the story first, which just goes to show their level of insincerity about it.”

Ley says the government’s decision to scrap the Australian Building and Construction Commission has added to construction costs and exposed the agenda item list for the summit.

“The CFMEU first priority, ACTU second priority, every other union the third priority,” she said.

She said says allowing overseas workers to come quickly to Australia to fill the skills shortage is key to easing pressure on businesses.

Treasurer Jim Chalmers says the summit is being held in the spirit of co-operation, which extends to the opposition if they are willing to accept it.

“We aren’t expecting absolute agreement on every issue, and that’s not the goal, but I know there is a heap of enthusiasm to find a broad consensus on the way forward,” he said.

“This is a working summit, not a soiree. We want participants to roll up their sleeves and bring fresh ideas to the table.”

The jobs summit will be held in Canberra on the first two days of September, Prime Minister Anthony Albanese announced last month.

An issues paper on the key challenges and questions to be discussed is expected to be released by mid-August.

A full list of confirmed attendees will be released and is expected to include employers, workers, community representatives and state and territory leaders.

The Australian Council of Trade Unions has released its first paper ahead of the September summit outlining how the economy can be overhauled in the national interest.

ACTU secretary Sally McManus says Australian workers have suffered through nearly a decade of insecure work and stagnant wages, and have been met with historically high inflation resulting in real pay cuts.

Chalmers says everyone will be able to provide a submission to the Employment White Paper, which will help map out the future of Australia’s skills and labour.

Outcomes from the summit and subsequent discussions are expected to inform the treasurers’ first budget on October 25.