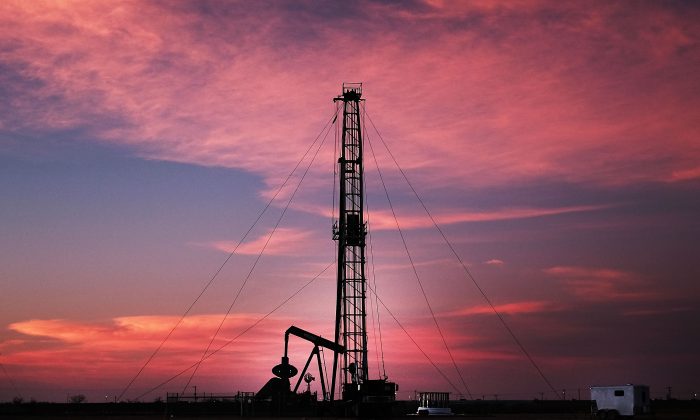 An oil drill in Midland,Texas, on Feb. 5, 2015. Spencer Platt/Getty Images
US News

WASHINGTON—Supporters of American energy exploration and development are alarmed at an activist judge’s ruling last week that environmentalists claim provides their movement with the “Holy Grail” ruling they need to cripple the nation’s oil and natural gas industries.

If the ruling remains in place, the Trump administration’s energy agenda that depends on increasing fossil-fuel production to reduce reliance on foreign energy could be in trouble.

WildEarth Guardians climate program director Jeremy Nichols reportedly described the court ruling as “the Holy Grail ruling we’ve been after, especially with oil and gas … [because] it calls into question the legality of oil and gas leasing that’s happening everywhere.”

In a case known as WildEarth Guardians v. Zinke, Judge Rudolph Contreras of the U.S. District Court for the District of Columbia ruled the Interior Department’s Bureau of Land Management (BLM) “did not sufficiently consider climate change” when authorizing oil and gas leasing on federal land in Wyoming, Utah, and Colorado.

Contreras was nominated by President Barack Obama and confirmed in March 2012. He’s also a member of the Foreign Intelligence Surveillance Court.

The BLM “summarized the potential on-the-ground impacts of climate change in the state, the region, and across the country” but failed “to provide the information necessary for the public and agency decisionmakers to understand the degree to which the leasing decisions at issue would contribute to those impacts,” Contreras wrote in the court’s memorandum opinion.

Specifically, the BLM “did not adequately quantify the climate change impacts of oil and gas leasing.” Because the Bureau did not take a “hard look” at greenhouse gas emissions related to the Wyoming leases, this means the environmental assessments that found no significant impact on the environment regarding those leases didn’t comply with the National Environmental Policy Act (NEPA).

The Bureau must do the assessments properly “addressing the deficiencies identified by the Court.” The court ordered the BLM to reconsider the nine Wyoming leases at issue and enjoined the Bureau from issuing new drilling permits on the affected land until the court order is complied with.

Environmentalists claim the carbon dioxide generated by the consumption of fossil fuels such as petroleum and coal is responsible for climate change, but this theory of manmade global warming has never been proven. Critics say the sun, as opposed to human activity, and other factors are more likely responsible for whatever climate change may be taking place.

Myron Ebell, director of the Competitive Enterprise Institute’s Center for Energy and Environment, says the court’s ruling is dubious.

“The judge is apparently trying to stop or delay oil production on federal lands in Wyoming based on technicalities,” Ebell told the Epoch Times.

“The information on greenhouse gas emissions he claims is lacking has actually been available for some time in earlier federal filings. And even if it were not, it’s silly that the judiciary thinks they can require climate impacts for federal permits without any legal basis. They are making up requirements instead of following the law.”

Donny Ferguson, president of Americans for a Better Economy, an Alexandria, Virginia-based nonprofit organization, told The Epoch Times “this is just the latest example of political, activist judges using their gavels to bludgeon Americans with an agenda rejected by both the public and science. A sensible court should overturn this, and Congress must strip judges of their abusive power to go outside the law.”

U.S. Rep. Liz Cheney, a Republican who represents Wyoming, issued a statement saying the judge’s decision should be overturned.

The ruling “reflects the litigation strategy used by far-left environmental extremists to thwart energy development in Wyoming. It is yet another example of why the administration needs to overhaul NEPA implementation across the federal government. I will continue to work with President Trump to pursue policies that restore the voice of local stakeholders in Wyoming and reduce the serial litigation imposed by radical environmental groups.”