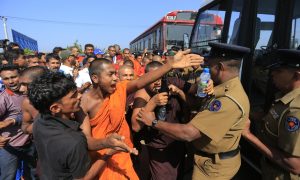 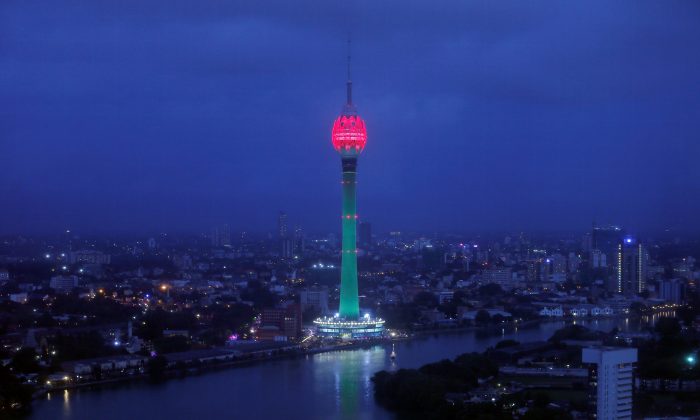 The Lotus Tower, the tallest tower in South Asia in shape of a 356-meter lotus and built with Chinese funding, is seen during its launching ceremony in Colombo, Sri Lanka on Sept. 16, 2019. (Dinuka Liyanawatte/Reuters)
Asia & Pacific

COLOMBO—The grand opening of Sri Lanka’s tallest tower was mired in controversy on Sept. 16 when President Maithripala Sirisena said one of the Chinese firms contracted to work on the project had disappeared with $11 million of state funds.

Sirisena made the allegation at the launch ceremony of the China-financed Lotus Tower, a 356.3-meter (1,169 ft) construction in the shape of a lotus bud featuring a revolving restaurant, conference hall and observation area.

The Chinese embassy in Colombo did not respond to requests for comment.

The tower, overlooking Beira Lake in central Colombo, is expected to become a major tourism attraction.

Sirisena said that in 2012, under his predecessor former President Mahinda Rajapaksa, the state-run Telecommunication Regulatory Commission (TRC) had deposited 2 billion rupees ($11.09 million) with Aerospace Long-March International Trade Co. Ltd. (ALIT), a Chinese firm chosen as one of the main contractors.

“In 2016, we found ALIT had disappeared. We investigated into this and the Sri Lankan ambassador in Beijing went to the address of ALIT personally on my instruction to find there was no such company,” Sirisena said in a speech.

“This is the money we could have spent for development of this country, for education, and medicines of patients.”

Sirisena’s audience at the opening ceremony included Chinese envoy to Colombo Cheng Xueyuan. It was not possible to approach Cheng at the ceremony for comment and officials at China’s embassy in the Sri Lankan capital did not respond to text and WhatsApp messages.

It was not immediately possible to contact ALIT via phone or email.

Sirisena had suspended most of the Chinese-backed infrastructure projects started under Rajapaksa when he came to power in 2015 over allegations of corruption, overpricing and flouting government procedures.

But more than a year later, the Sirisena government allowed Chinese projects to resume after a few changes in some of them.

China’s Exim Bank in 2012 agreed to lend 80 percent of the total investment of $104.3 million in the Lotus Tower, with the rest to be met by TRC.

Sirisena said the government had started repayment of the loans made, but more funds were needed to complete the project.

Chinese investment has become controversial in Sri Lanka, which is struggling with expensive external debt and where growth is expected to slump to its worst level since a contraction in 2001. Tourism, the country’s third largest foreign currency earner and fastest growing sector, was also hit hard by Islamist militants attack in April.

Political sources close to Sirisena and Rajapaksa have said talks between the president’s center-left Sri Lanka Freedom Party (SLFP) and Rajapaksa’s Sri Lanka Podujana Peramuna (SLPP) for a coalition deal have broken down.