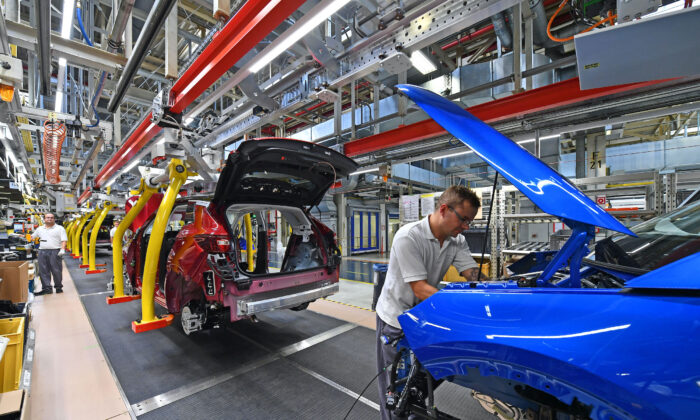 A man works on the assembling of an Opel "Grandland X" SUV car at Opel's plant in Eisenach, eastern Germany, on Aug. 28, 2019. (Martin Schutt /DPA/AFP via Getty Images)
Companies

Opel Split ‘Off the Table’, Eisenach Plant to Resume Production in January

BERLIN—Opel will not split off its German factories from its operations, and production at the Eisenach plant will resume in January, Opel owner Stellantis and union IG Metall said on Wednesday, soothing fears over the marque’s future.

Stellantis also said that the Grandland SUV, which was temporarily produced in France when Eisenach was shut down in September due to a global chip shortage, will be made exclusively in the German factory from the new year.

German unions and politicians in the states have criticised Stellantis’ communication on its plans for the two factories, in Russelsheim and Eisenach. They said it had not been made clear whether the plants would be legally split off from Opel and if Grandland production would return to Eisenach.

Stellantis had said in September that a split-off structure could be more efficient and flexible after German newspaper Handelsblatt reported this was under consideration.

IG Metall said in a statement on Wednesday that the works council and union representatives had agreed that such a split was “off the table.” Eisenach will become its own company within Opel Automobile GmbH, while Ruesselsheim’s legal structure will remain as it is, the union added.

“The outsourcing and break-up of Opel was prevented and employment secured. I hope that management will steer the company more constructively and transparently into the future from now on,” Joerg Koehlinger of IG Metall said.

Stellantis, formed this year by the merger of Italian-American automaker Fiat Chrysler Automobiles and France’s PSA Group, confirmed the news.

By Victoria Waldersee and Gilles Gillaume