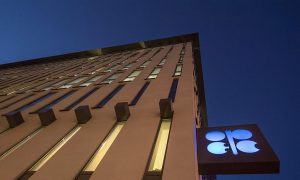 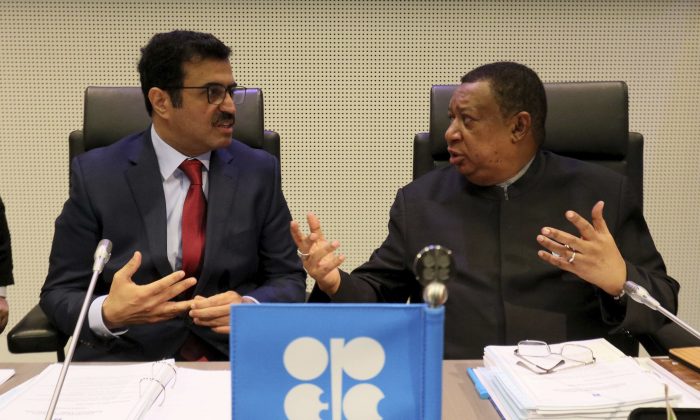 Mohammed Bin Saleh Al-Sada, Minister of Energy and Industry of Qatar and President of the OPEC Conference talks with Mohammad Sanusi Barkindo (L-R) OPEC Secretary General of Nigeria prior to the start of a meeting of the Organization of the Petroleum Exporting Countries, OPEC, at their headquarters in Vienna, Austria, on Nov. 30, 2016. (AP Photo/Ronald Zak)
Investment

BAKU, Azerbaijan—The investments needed to ensure stability in the global oil industry are returning after a downturn, but the pace is still slow, OPEC Secretary General Mohammed Barkindo said.

Barkindo was talking to Reuters and an Azeri TV station Real on the sidelines of an OPEC and non-OPEC monitoring committee, which is meeting this weekend in the Azeri capital of Baku.

He also said leading oil producing nations have made significant achievements in terms of cooperation and efforts to avoid imbalance between the supply and demand on the global oil market.

Barkindo added he would welcome greater engagement with the United States to tackle industry issues.

According to estimates from Saudi Aramco Chief Executive Officer Amin Nasser last year, the global oil and gas industry needs to invest more than $20 trillion over the next 25 years to meet expected growth in demand and compensate for the natural decline in developed fields.

“A number of challenges are arising from the down cycle that we have seen, and at the top of that list is an issue of investments. We have seen investments contract for a couple of years and even at the moment the rebound is very, very minimal,” Barkindo said.

“For the long cycle projects, which are the base for the global economy, the picture is still not encouraging. Therefore we welcome the United States to join us in this global energy dialogue to address this and other issues affecting this industry.”

The Organization of the Petroleum Exporting Countries and other large oil producers led by Russia have agreed on joint efforts to curb their oil production in order to restore the balance on the global oil market and support the price.

The first such deal was signed at the end of 2016 in Vienna.

“We remain on course and we have made significant progress in ensuring that we do not allow the market to return to an imbalance,” Barkindo said, speaking in English.

“All participating countries are committed to ensuring that supply and demand remain balanced through stock movement that would remain within the five-year industry average,” Barkindo added.

“That remains our key metrics in assessing the state of the oil market and so far so good.”