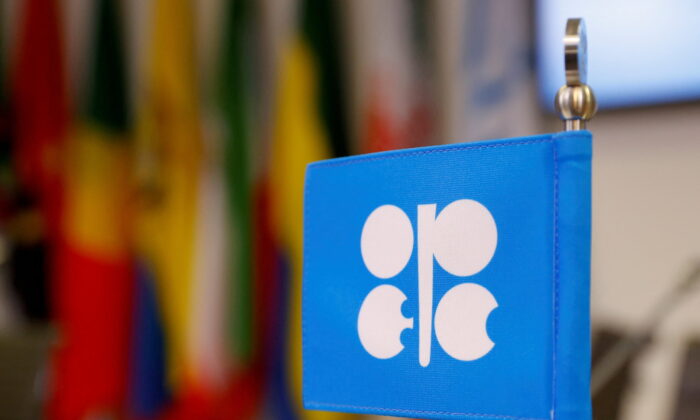 The logo of the Organization of the Petroleum Exporting Countries (OPEC) inside its headquarters in Vienna on Dec. 7, 2018. (Leonhard Foeger/Reuters)
Energy

OPEC’s new secretary general said that Russia’s membership in OPEC+ is vital for the success of the agreement, Kuwait’s Alrai newspaper reported on Sunday, quoting an exclusive interview with Haitham al-Ghais.

He said OPEC is not in competition with Russia, calling it “a big, main and highly influential player in the world energy map,” Alrai reported.

OPEC+ is an alliance of the Organization of the Petroleum Exporting Countries (OPEC) and allies led by Russia.

Al-Ghais, Kuwait’s former OPEC governor, will head his first OPEC+ meeting on Aug. 3, in which the group may consider keeping oil output unchanged for September, despite calls from the United States for more supply.

AL-Ghais told Alrai that “OPEC doesn’t control oil prices, but it practices what is called tuning the markets in terms of supply and demand,” describing the current state of the oil market as “very volatile and turbulent.”

He added of the recent hikes in oil prices: “As for me, I still stress that the recent rise in oil prices is not only related to the developments between Russia and Ukraine.

“All the data confirm that prices began to rise gradually and cumulatively, and before the outbreak of the Russian-Ukrainian developments, due to the prevailing perception in the markets that there is a shortage of spare production capacity, which has become confined to a few and limited countries,” al-Ghais said.

Oil has soared in 2022 to its highest since 2008, climbing above $139 a barrel in March, after the United States and Europe imposed sanctions on Russia over its invasion of Ukraine. Prices have since eased to around $108, as soaring inflation and higher interest rates raise fears of a recession that would erode demand.

Replying to a question about the factors that will affect oil prices by the end of the year, al-Ghais said: “In my view, the most important factor will be the continued lack of investments in the field of drilling, exploration and production.”

“This will push prices in an upward direction, but we cannot determine the level they will reach.”