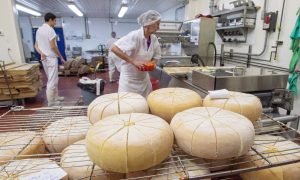 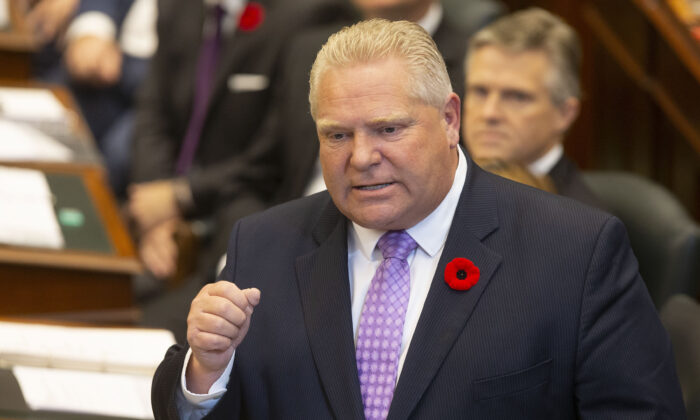 Ontario Premier Doug Ford speaks in the Ontario legislature in Toronto on Oct. 28, 2019. His government proposed an act to reduce the regulatory burden on businesses and consumers as the legislature opened after a long break. (The Canadian Press//Chris Young)
Economies

Ontario has a problem. It’s awash in red tape.

Soup kitchens have to follow the same rules that apply to major restaurant chains and face hefty fines or can even get shuttered if they don’t.

And then there’s the “arbitrary banana rule.” If it’s in the produce section, no problem. If it’s in the ready-to-eat section, it needs a label showing a calorie count or nutritional facts.

The Doug Ford government thus created the Ministry of Small Business and Red Tape Reduction and on Oct. 28 proposed “The Better for People, Smarter for Business Act, 2019,” which contains over 80 actions to lower the cost of doing business and make it easier to comply with regulations, and interact with the government. By eliminating excessive regulation, Ontario hopes to increase efficiency, productivity, and economic growth.

Cutting red tape falls under the broader category of structural reform. It’s critical to policy-makers in an environment of slowing global growth and constraints on government spending (fiscal policy) to stimulate the economy due to mounting debt. Furthermore, additional central bank action (monetary policy) seems limited given that interest rates are already near historic lows. Other structural reforms include reducing trade barriers between provinces and making post-secondary education more accessible and responsive to skills demand.

The goal is to reduce duplicative, outdated, and unclear rules. The effort will also work to harmonize regulations with federal and other provincial bodies.

The ministry expects the proposed act and regulatory changes to reduce costs by $52 million.

All countries need to consider structural reforms, said Kristalina Georgieva, the new managing director of the International Monetary Fund (IMF), in her opening remarks at the IMF’s annual meetings on Oct. 17.

“There is a range of ways countries can invest in their futures,” she said, noting “cutting red tape” as a specific example.

Grant Hunter, Alberta’s minister in charge of cutting red tape, previously told The Epoch Times that jurisdictions that have done a good job of curbing regulations have seen economic growth of 0.8 percent to 2 percent.

Marco Navarro-Genie, senior fellow at the Frontier Centre for Public Policy, says that by and large the champions of dialling back regulation have been mostly on the conservative side, with Ontario and Alberta making recent waves, but that cutting red tape is not an ideological issue. British Columbia has been carrying the torch for red tape cutting in Canada for nearly 20 years.

Navarro-Genie is an expert in federal structural issues and president and CEO of the nascent Haultain Research Institute.

He explains that as organizations—including governments—grow, it’s almost natural to have more rules. And the more rules there are, the more things they can control.

“The larger the bureaucracy, the more resistance there is to this kind of thing [cutting red tape], so it’s no surprise that at the federal level this has been less successful and more difficult to implement,” Navarro-Genie said.

Ontario Chamber of Commerce (OCC) president and CEO Rocco Rossi welcomed the newly proposed legislation. In an Oct. 28 statement issued in response to the government’s announcement, Rossi said that Ontario is “the most regulated province in Canada” and that the OCC has worked closely with the provincial government on eliminating red tape.

Critics may raise concerns about weaker environmental protections due to the reduction in regulation, but Navarro-Genie says British Columbia shows how it can be done.

“They have removed almost 50 percent of excessive regulation, and yet you look at B.C. and you cannot say that B.C. has lax or irresponsible environmental rules. In fact, what you might say is that B.C. is the opposite—that B.C. has some of the highest environmental standards in this country,” Navarro-Genie said.

He adds that it’s therefore not beyond the wit of Ontario to do just as well if not better. The proposed legislation says environmental protections will not be compromised but rather will be reinforced.

The Canadian Federation of Independent Business (CFIB) gave Ontario a grade of A- in its 2019 Red Tape Report Card. That’s Ontario’s highest grade ever and a big jump from the C+ it got in 2018.

The grading is based on willingness to cut red tape, if the province keeps a registry of all regulations so that it knows the size of the problem, and if there’s a limit on new rules.

As of 2012, Ontario had over 380,000 regulatory requirements. The CFIB recommends that the province update that count and eliminate one rule for every new rule added once it has hit its 25 percent reduction target.

Ontario is Canada’s most populous province, and the buildup in regulation has contributed to the country’s decline in the World Bank’s Ease of Doing Business rankings. Canada’s ranking has fallen from 4th in 2006 to 23rd in 2019.

The World Economic Forum’s Global Competitiveness Index for 2019 had Canada ranked 14th out of 141 countries, but 38th based on burden of government regulation.

The Business Council of Canada is focusing on metrics such as these to measure Canada’s progress. Among other things, it recommended creating an independent, arm’s-length oversight agency on regulatory competitiveness with a legislated mandate.

Another albatross hampering business competitiveness in Ontario is that property taxes on businesses are much higher than residential taxes. An October 2019 study by the Fraser Institute showed that in Toronto, the commercial tax rate was 3.8 times that of the tax rate for residential properties. Most large Canadian cities examined in the study show similar disparities.

The study doesn’t evaluate whether the “user pay” principle—paying taxes based on how much municipal services are used—is being applied, but study co-author Josef Filipowicz said political motivations are at play.

“It can be argued that the lower rates paid by owners of residential housing reflect the fact that local governments face incentives to minimize taxation on groups most likely to vote in local elections, most notably homeowners,” he said in the study.

Property taxes are the main source of revenue for local governments.

Navarro-Genie says that for all the good of creating greater efficiencies through cutting red tape, one has to ensure that government subsidies to companies or industries don’t thwart the original intent.

An example he provides where subsidies can act contrary to regulation is supporting the automotive industry while trying to protect the environment.

“The same kind of thinking that wants to cut red tape for the purposes of making things more efficient should also perhaps pay attention and look at the way in which some government subsidies are handed out,” Navarro-Genie said.

If businesses become reliant on government handouts, that could impair their productivity and efficiency.