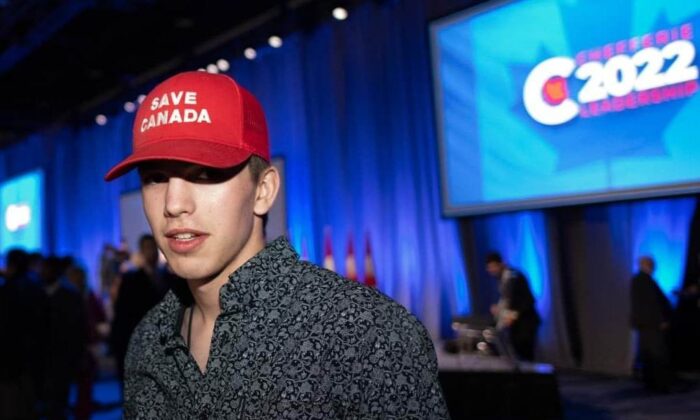 A Catholic high school student in Renfrew, Ontario, has filed an appeal with his school board after being suspended over his interactions with transgender students. He alleges that the suspension constitutes discrimination against his religious beliefs.

Josh Alexander, a Grade 11 student at St. Joseph’s Catholic High School, told The Epoch Times he is standing up for girls at his school who feel uncomfortable with biological males who identify as females using the girls’ washroom. One such female student told The Epoch Times, “for my own privacy and safety … I felt like I had to say something.”

Alexander has also called the transgender students by their “dead names” (the names they used before transitioning) and has insisted in classroom discussions that there are only two genders.

His lawyer, James S.M. Kitchen, told the school’s principal in an email (which Kitchen forwarded to The Epoch Times), “[Alexander] cannot, due to his sincere religious beliefs, knowingly speak a falsehood, such as acknowledging the fiction that people can change from male to female (or vice-versa).

“As a matter of his Christian beliefs, which happen to be consistent with biological truths regarding gender, Mr. Alexander believes all human beings, except in rare circumstances of developmental abnormality, are made by God as either immutably male or female.”

Sophie Smith-Doré, co-founder of Arnprior Pride and mother of one of the transgender students at the school, told The Epoch Times in a written message, “Trans folks and their loved ones (like most marginalized folks) are constantly doing this emotional work and it’s exhausting. We bear the burden of trying to protect our gender diverse kids.”

She said Alexander and the adults who have rallied behind him belong to the “far-right” and are “scrambling for an agenda. … It doesn’t appear to matter to them that their casualties are children.”

A panel of Renfrew County Catholic District School Board trustees will hear Alexander’s appeal, and Alexander has requested the hearing be made public via videoconferencing as the matters involved are of “public interest.”

The school’s principal, Derek Lennox, told The Epoch Times he cannot comment on the situation. In his communications with Kitchen, which the lawyer shared with The Epoch Times, Lennox acknowledged the appeal and set out conditions under which Alexander could return to school in the meantime.

Alexander refused to comply with those conditions. “Your expectations, among other things, constitute unlawful religious discrimination,” Kitchen told Lennox.

Kitchen works with the Christian conservative organization Liberty Coalition Canada, which posted a statement on its website saying, “Josh not only has a right to express himself during class discussions and through public forums, he also has a right to not be discriminated against by his school for his sincere religious beliefs. Being suspended and excluded from classes is the height of discrimination.”

Alexander was due to return to school after his suspension on Jan. 9. His suspension had begun on Nov. 23, two days before a protest and walk-out he organized at the school over transgender students using the girls’ washrooms.

Lennox told him not to return on Jan. 9 because he refused to comply with the conditions.

Alexander attended anyway and has, for that reason, been suspended again until Jan. 31.

He told The Epoch Times, “I’ve been kicked out of class for long enough. … They had banned me from doing my classes just because there were students who disagreed with my views in those classes. So I figured that was enough and … I decided to go back.”

The vice principal followed him to his classes, Alexander said, and “wrote down anything I said … and kept asking me to leave all day long.”

The school has alleged that Alexander is “bullying and harassing” the transgender students.

Lennox’s investigation report said Josh’s actions were “injurious to the moral tone of the school or to the physical or mental well-being of others in the school” and were “motivated by bias, prejudice or hate.”

Alexander told The Epoch Times, “It’s a common tactic, they’re going to try to self-victimize, but I’m simply just exercising my religious beliefs. I can’t compromise on something like that. They can label me as they wish, but the truth is on my side.”

Kitchen said the term “bullying” has come to mean something different than it used to.

“Those who live in the real objective world, we have a pretty good grasp on what bullying is. We’ve seen it with kids for decades, and … it’s really sad and unfortunate. But the woke world has taken it to mean something different,” Kitchen said.

“They’ve taken it out of actual harassment—social and physical, or even, or even sexual—and they sort of added on to it or twisted it to mean that, well, if you have ideas that I find deeply offensive, or that bother me, or that challenge my notions of who I am, then—even though you’re respectful and peacefully sharing those opinions and ideas and beliefs—if you do that, it’s bullying to me.”

Kitchen had told Lennox that Alexander would not “intentionally intimidate or otherwise harass any transgender student. However, he will not be responsible for transgender students unreasonably experiencing subjective feelings of offence or being ‘unsafe’ as a result of Mr. Alexander expressing his religious beliefs.”

Lennox listed among Alexander’s actions that warranted suspension that he made “inappropriate comments with respect to trans students … on social media” and “used a derogatory term in reference to a trans student.”

Alexander said Lennox must have meant the flier he posted for his protest last year, which says “Remove males from the female washrooms. Keep the perverted agenda out of the education system.”

He said he also used a word in a class discussion which he didn’t realize was considered a derogatory term. “The word wasn’t used as an insult,” he said.

Mark Searson, director of education for the Renfrew County Catholic District School Board, told The Epoch Times in December he cannot discuss specific students with the press.

Searson said the board takes the “pastoral approach” with transgender students, in which principals and chaplains engage students in conversations.

“There’s so much polarization in the world and in our community right now, in particular over this issue,” Searson said. “We want to do everything we can to bring everyone back together and ensure we can have some dialogue.”

He said the schools in his board have gender-neutral, single-person washrooms in addition to the gendered washrooms. However, Searson said, “The Ontario Human Rights Code has made it very explicit that individuals do have the right to utilize the restricted washroom of their lived gender identity.”

Alexander said some girls at the school will “talk to me, but they don’t necessarily want to go public. And I don’t really blame them after the hostile response I received.”

One such girl, a Grade 11 student from St. Joseph’s, spoke to The Epoch Times in December. She said the first time she saw a transgender student in the girls’ washroom it “really caught me off guard, because I didn’t even really know at that point that he self-identified as female.”

Josh said, “It’s just kind of disappointing to see that so many adults are afraid to speak out and they’re allowing both myself and female students to fight this battle on our own.”

A date for the appeal hearing has not yet been set, and Alexander has not yet heard whether it will be open to the public via videoconferencing as requested. Kitchen said if the trustees don’t rule in favour of Alexander, they will consider requesting a judicial review.