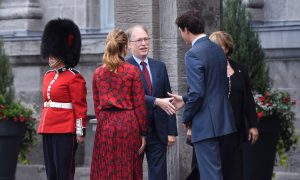 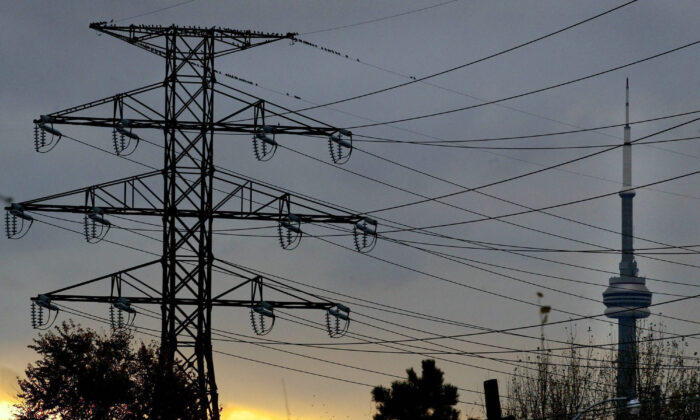 A hydro tower is seen with the CN Tower as a backdrop in Toronto in this file photo. (CP Photo/Kevin Frayer)
Canada

Electricity prices soared 55 percent for households and small businesses in Ontario on Nov. 1. The province’s residents pay 22 percent more for electricity, on average, than the rest of Canada, according to a study by the Fraser Institute published Nov. 5.

The Progressive Conservative government hasn’t managed to cut electricity bills, an election campaign promise. But bad decisions by politicians a decade ago have hamstrung the current administration’s ability to make much of an improvement.

The Fraser Institute study, titled “The Ontario Government’s Electricity Policies 2018-2019: How They Are Failing and How to Fix Them,” proposes the radical solution of passing laws to cancel or renegotiate fixed-price guaranteed contracts to green energy providers, which are the culprits for rising electricity bills. Meanwhile the province adds to its massive debt load by having to provide energy rebates.

The province is suffering due to a classic case of past excessive government meddling, which also disregarded the proper functioning of markets by basing decision-making on ideology rather than evidence, according to Carleton University business professor Ian Lee. Lee also advocates legally terminating the guaranteed prices to green energy providers.

Between 2003 and 2014, Ontario was shutting down coal-fired power plants while replacing them with new natural gas, wind, and solar plants. The result, however, was that it ended up producing more electricity than it needed, as electricity usage was trending lower.

The heavy users of electricity in Ontario’s economy were declining, like manufacturing and pulp and paper milling, as the economy was becoming more service-oriented. Consumers were also becoming more energy-conscious and efficient with heating and appliances.

Yet Ontarians have to pay for the electricity whether they use it or not. It can’t be stored for a rainy day.

Going green used to be so en vogue. “I think they got seduced by their own rhetoric,” Lee said about Ontario’s Liberal government a decade ago.

What led to the quandary hydro consumers now face, he explains, was the Green Energy Act (GEA) put in place by the Liberals in 2009.

“It’s a subsidy program where you charge everybody else and then pay it to the people who are being paid to produce solar and wind because it wasn’t economic to produce,” Lee said.

Power generation is the biggest component of the monthly electricity bill, and thanks to the GEA, the more traditional sources of power like hydroelectric and nuclear get paid lower rates than renewable sources.

The infamous global adjustment (GA), which grew from under $0.01 to about $0.10 per kWh between 2008 and 2017, is a surcharge for the difference between the going market wholesale price and the fixed-price guarantees. It also pays for some conservation programs and some costs related to nuclear power and gas capacity projects.

The Fraser Institute says the GA has gone up 13 percent in the year following the Progressive Conservatives’ rise to power in Ontario in June 2018. The GA must come down for electricity bills to fall.

The institute’s study shows that payments to solar and bioenergy generators make up 15 percent of the GA yet only produce 3 percent of Ontario’s electricity. The study goes on to say that if those generators were removed from the system and replaced with generators earning the market rate, the GA could be lowered by 15 percent.

The market-distorting supply behaviour is a case study of how legislation like the GEA can bring about a catastrophe. By granting energy producers guaranteed above-market prices, it eliminated any incentive for firms to work to remain competitive like they would in a normal market environment.

“If, for example, wind-power producers enter zero-price bids to maximize market share, it drives down the price paid to everyone else and thereby drives up the global adjustment liability throughout the entire electricity system, not just for wind companies,” said the Fraser Institute.

It was a government-driven decision that politicized the whole industry, putting supply and demand out of balance and dismantling the market mechanism for determining a fair price.

“In the last 10 or 15 years, it got very politicized, and green environmental groups started to lobby the politicians to become interventionist,” Lee said. “These are ideologues, not scientists, not energy engineers, and they started advocating things that made sense if you are a political activist.”

In February 2017, while the Liberals were still in power, Ontario Energy Minister Glenn Thibeault admitted that the GEA’s implementation was problematic. Instead of setting targets for specific types of energy, the government should have made power generators compete for electricity contracts, he said.

“We must unleash the electricity sector and our system operator to find the appropriate mix to fulfil a capacity auction that would ensure ratepayers receive the best prices possible,” said Thibeault, as reported by Global News.

Lee and the Fraser Institute both say the long-term fixed guarantee contracts need to be legislatively cancelled.

“It was the conceit of the central planners,” Lee said.

Piling on the Debt

Ontario is unusual as compared to its neighbouring provinces in that it gets most of its power from nuclear (nearly 60 percent), whereas Quebec and Manitoba rely more heavily on cheaper hydroelectric power.

Experts have been recommending that Ontario buy hydroelectricity from Quebec instead of overbuilding.

The Ford government is gradually digging the province out of the hole left by faulty policies and their implementation. It has ended more than 750 renewable energy contracts, which were costing taxpayers an estimated $790 million.

“The Green Energy Repeal Act gives government the authority to stop approvals for wasteful energy projects where the need for electricity has not been clearly demonstrated,” according to a press release from Ontario’s Ministry of Energy, Northern Development and Mines on Dec. 7, 2018.

Ontario’s net debt stands at $338 billion, which is the most of any sub-national borrower globally, according to the Financial Accountability Office of Ontario, which cites the rating agency Moody’s. The government is attempting to take the sting out of high electricity prices by giving rebates using borrowed money.

“This year, the province is expecting to subsidize residential, farm, and small business electricity bills to the tune of at least $4 billion,” according to Ontario’s 2019 economic outlook and fiscal review.

This is an increase in program spending of $1.4 billion in the last fiscal year for “electricity cost relief programs.”

Correction: A previous version of the graph had an incorrect legend. The Epoch Times regrets the error.