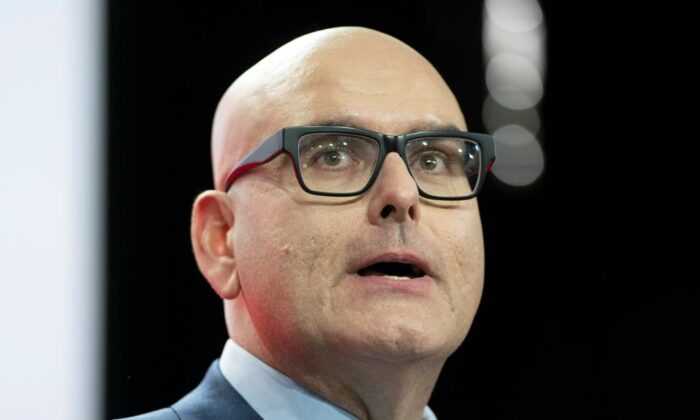 The Ontario Liberals say they will ban handguns within a year of taking power if they win the upcoming election, the party’s leader Steven Del Duca on April 19.

“I’ve had it with Doug Ford’s open for business policy for guns,” Del Duca said in a statement.

The plan also includes taking advantage of the federal gun buy-back program, involving the province in counter-gun smuggling operations at the border with the United States, and advocating for a national handgun ban.

The Ontario Liberals are currently limited to seven seats in the provincial legislature, but they receive the second most voting intentions (26 percent) after the ruling Ontario Progressive Conservatives (37 percent) in survey numbers released on April 20 by Abacus Data.

Del Duca backs his campaign promise by citing data from the Toronto Police Service (TPS), which says that 49 people have been killed or injured so far in 2022 by shootings and firearms discharges.

More recent TPS data shows the number is now 56, including 15 deaths. In the entire year of 2021, 48 people were killed or injured (11 deaths) by shootings in Toronto, which was lower than the three previous years.

The Ontario Liberals also provided data from Statistics Canada showing that a handgun was used in 61 percent of firearm-related homicides in 2020.

Premier Doug Ford defended his policies on gun issues during a press conference in Thornhill on April 20.

“I have been very clear on my stance. We’ve put $185 million in fighting gangs and guns. That’s what we need to do is continue to invest, support our police,” he said.

Ford said the police know that guns are coming illegally across the border.

“But when we catch these people, it goes in front of a JP [justice of the peace], they can’t have a slap on the wrist … in two days these guys are running around on the streets. We need to work collaboratively with the federal government to toughen up any gun laws that we have,” he said.

Some police officials have publicly testified recently about the banning of certain types of firearms to reduce crime, but they said legal firearms owners are not the ones involved in gun violence.

“The issue is not law-abiding Canadians who want to own firearms,” Regina police chief Evan Bray told the House of Commons Standing Committee on Public Safety on Feb. 8.

“The issue really is people who are involved in criminal activity who are obtaining firearms through illegal means, such as cross-border trafficking, theft from legal gun owners, and straw purchases.”

Toronto’s deputy police chief Myron Demkiw also testified at the committee and said that 86 percent of handguns used in crime in 2021 in his city came from the United States.

Data from Statistics Canada shows that the vast majority of individuals responsible for gun-related homicides in 2020 (89 percent) did not hold a valid firearms licence.

There is no Statistics Canada data available showing whether the firearm used in the homicides was legally owned, or if it was used by its legal owner or another individual.

At the same time, it also seeks to reduce gun-crime punishments to address what it calls systemic racism.

The government has presented Bill-C5 in Parliament, a purported anti-racism measure to reduce the proportion of Indigenous and blacks incarcerated by removing mandatory minimum sentences for a number of firearms-related offences, such as robbery with a firearm.