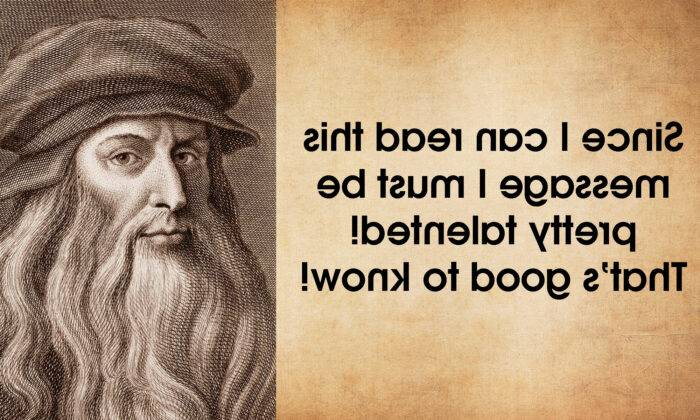 Only ‘Very Intelligent’ People Can Decipher These ‘Da Vinci’ Code Messages–Can You?

The famed artist and inventor Leonardo Da Vinci (1452–1519) not only led the Renaissance with his unparalleled paintings and innovative ideas, but he also developed a private writing technique that stumped his contemporaries and continues to puzzle historians today.

Da Vinci was left-handed, and some believe he had dyslexia, which might explain why he developed “mirror writing,” a technique that involved writing backwards from right to left.

Regardless of his reasons for writing this way, whether as a form of code to keep his thoughts private and away from any prying eyes, or else as a kind private game with himself, there’s no doubt that it attests to another one of his many talents.

Today we’ll test your ability to read the kind of writing that Da Vinci used. How will you fare compared to one of the greatest thinkers of all time? Here goes with our first sample. Oh, and be sure not to use a mirror!

See if you can decipher the following text:

Have you figured it out just yet?

If you’re having some trouble reading, here’s a hint: start by reading from right to left and flipping the words and letters around. Pretty soon, you’ll see what we’re talking about and be in on the backwards joke.

Take a moment to decode the text before scrolling down to see the answer. When you think you have it, or if you’re totally stumped by it and just have to see what it says, here is the answer:

Perhaps now you can see how people like Leonardo managed to use this backwards writing on a regular basis once they got used to it. Here’s a second test for you that should be a lot easier than the first, since now you know what you are up against.

Try to decode the following message:

Any luck with round two? Unfortunately, this time you have some words and combinations of letters that can be a little confusing, since they suggest something else to your mind when read backwards. If you need a hint, just think about the content of the first message and how complimentary it was.

Figured it out? Congratulations if you did, and as a reward, you’ll get a little confidence boost from whoever wrote it.

Aside from geniuses like Leonardo Da Vinci, there are two main groups that scientists have identified who use this technique on a regular basis. The first is adults who have suffered some kind of brain trauma from a tumor or lesion. The part of the brain that is affected leaves them only able to write in the other direction.

The other group includes many of us, when we were children, that is. As neuroscientist Mariano Sigman explained in a TED Talk, many children come to school writing certain letters backward before they are taught otherwise. Whereas many adults see kids’ backward writing as a problem that needs to be fixed, it is actually a fascinating phenomenon for study.

“First of all, because the children were never taught to write backwards—they learned it on their own,” Sigman explained. “Secondly, because mirror writing is very difficult—if you disagree, just try to write an entire sentence backwards.”

Noting that our brain is trained to recognize shapes in and of themselves, not necessarily the way they are configured, Sigman points out that letters can be very tricky.

While as Sigman notes, a dog turned around or upside down is still immediately recognizable as a dog, it’s just not as simple with letters.

He adds: “[I]t was only later in the history of humanity that alphabets appeared, imposing a cultural convention that goes against our visual system’s natural functioning.”