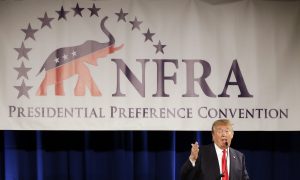 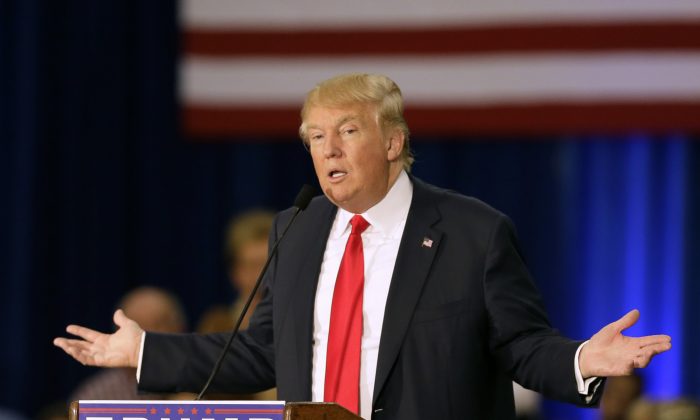 In this Aug. 25, 2015 file photo, Republican presidential candidate Donald Trump speak in Dubuque, Iowa. Not only is Trump an unconventional candidate, he's got a campaign operation that turns the conventional wisdom of electoral politics on its head. (AP Photo/Charlie Neibergall)
Crime and Incidents

Only Trump Could Get Away With These 6 ‘Trumpisms’

WASHINGTON—Lobbing rhetorical stink bombs at a large group of voters is not the normal way to get ahead in U.S. politics. Nor is alienating prominent figures of your own party.

But Donald Trump has turned the do’s and don’ts of campaigns on their head, prospering with tactics that could sink anyone else.

A review of “Trumpisms” that only Trump could get away with.

About those Huddled Masses Yearning to Breathe Free

After Mitt Romney’s 2012 loss to President Barack Obama, the Republican Party went through a period of soul-searching and determined that candidates needed to stop alienating Latino voters if they wanted to recapture the White House.

Enter Trump, who in his announcement speech accused the Mexican government of sending its criminals and rapists across the border and has proposed building a massive border wall and deporting every person in the country illegally.

Romney, in contrast, earned plenty of grief merely by suggesting that people in the country illegally would deport themselves if the U.S. denied them work and public benefits.

Arizona Sen. John McCain may not be some conservatives’ cup of tea, but he nonetheless spent 5 1/2 years as a prisoner of war after his plane was shot down over North Vietnam. He refused to leave, ahead of his fellow prisoners, when given the chance.

Trump, who has accused McCain of doing too little to help veterans, knocked the senator in July, first disputing that he was a hero, then declaring: “He’s a war hero ’cause he was captured. I like people that weren’t captured, OK?” Even the most partisan Democrats hail McCain’s service to his country.

Trump was furious at Fox News anchor Megyn Kelly for asking about his history of insulting comments aimed at women during the first GOP debate, and he has not forgiven her in the weeks since.

The Kelly feud has led to clashes between Trump and Roger Ailes, the Fox News chairman, who has called on Trump to apologize. Republicans tend not to pick a fight with Fox.

It’s late in the night and all through the house, not a creature is stirring — except Trump. He’s developed a habit of logging onto Twitter in the wee hours to deliver an assortment of broadsides, often at the previous evening’s cable news shows.

While other candidates might be sunk by petty name-calling and a hair-trigger reaction to what is said about them, that seems to slide off Teflon Trump.

Flip-flopping is trouble for most politicians, but Trump has done it merrily and with apparent impunity. He has shrugged off his old support for abortion rights and a single-payer health care system, and his former identification with the Democratic Party, with that-was-then-this-is-now nonchalance.

Trump says conservative darling Ronald Reagan was once a Democrat, too, and Trump says he shouldn’t be held accountable for past views.

Two brothers were on their way home from a Boston Red Sox game when, police said, they brutally beat a sleeping homeless man who is Hispanic. One later allegedly justified the attack by saying Trump “was right” about deporting “all these illegals.”