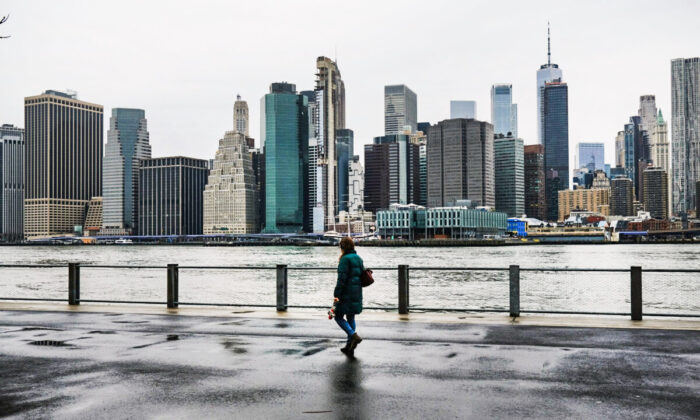 The Manhattan borough of New York City looms in the background of a street in the Brooklyn borough on March 28, 2020. (Spencer Platt/Getty Images)
New York

Only 8 Percent of Manhattan Office Employees Are Back in the Workplace Full Time: Study

Just 8 percent of Manhattan office workers have returned to the office five days a week for in-person work, according to data published on May 9 by the nonprofit organization Partnership for New York City.

Partnership for New York City, a business advocacy group, surveyed more than 160 major employers in the Manhattan borough of New York City from April 21 to May 4, 2022, in an effort to gauge how many of the borough’s one million office workers had returned to the workplace more than two years into the COVID-19 pandemic, and to examine what implications this may have on the future of the Manhattan central business districts.

In addition to the in-person work data, the survey found that 28 percent of workers were still working remotely full time, a drop from 54 percent in October 2021.

However, Partnership for New York City said it expects that the number of workers returning to the office will increase after Labor Day on Sept. 5, with employers anticipating that 49 percent of workers will return to the office on an average weekday in September 2022.

Of the employers surveyed, 78 percent indicated they would continue to embrace a hybrid work model, even after the pandemic comes to an end. That’s up from just 6 percent before the pandemic.

The survey findings come amid New York City Mayor Eric Adams’ repeated calls for employers to get their workers back in the office, stating that the move would help boost economic recovery.

“When employees don’t return to work, they don’t eat lunch at a nearby restaurant, shop at a local store, or take their clothes to the dry cleaners. Our business districts suffer, and it slows the recovery,” Adams said at the New York State Democratic Convention in February.

“It is time to get back to work. You can’t tell me you are afraid of COVID on Monday and I see you in the night club on Sunday,” Adams joked, adding that he hoped that CEOs would “map out a real plan of ‘this is when you need to come back'” within a few weeks.

Reluctance among employees to return to the office after years of working from home is still evident.

Ian Goodfellow, a director of machine learning at tech giant Apple Inc., quit his job over the company’s push to get people back in the office, according to a May 7 report by The Verge reporter Zoë Schiffer.

Goodfellow reportedly said in a staff memo he believed “strongly that more flexibility would have been the best policy for my team.”

Apple got employees back into the workplace on April 11, initially for at least one day a week before increasing it to two days a week on May 2, followed by three days per week effective May 23. The move has led to an uptick in employees threatening to resign, according to The New York Post.

Other big tech companies like Meta Platforms Inc., Alphabet Inc., and Amazon.com Inc. currently allow for some employees to work remotely for the foreseeable future.