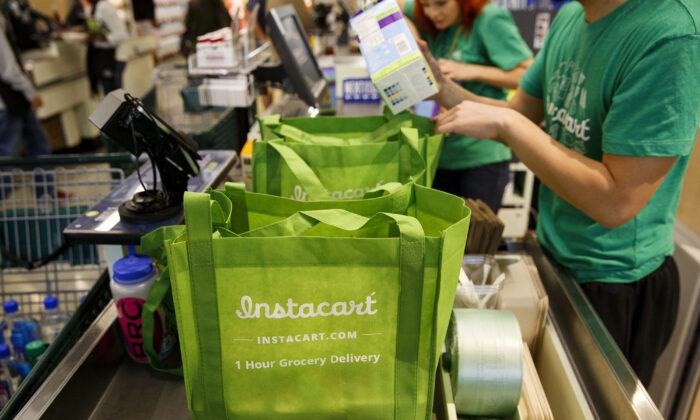 Online U.S. grocery prices surged year-over-year by 13.4 percent in July, beating the previous records of 12.4 percent in June, 11.7 percent in May, and 10.3 percent in April, according to the Adobe Digital Price Index released on Aug. 9.

Before the pandemic, online shopping was long immune to inflation, but since June 2020, online prices have persistently increased over a 25-month stretch, causing the U.S. economy to struggle in its recovery.

However, in July, total online prices declined 1 percent year-over-year and 2 percent from June, led by electronics, apparel and toys, after more than two years of inflation.

American consumers spent $73.7 billion online in July, down from $74.1 billion in June.

The fall in online prices for July was led by a 9.3 percent year-over-year plunge in electronics prices, which is the category in which consumers spend the most, reported Adobe.

Online prices for toys tumbled by 8.2 percent in July, the largest drop since late 2019.

Although online prices have generally deflated, Adobe said that some categories other than groceries moved in the opposite direction.

Only four out of the 18 categories in the DPI saw month-over month price increases.

Grocery prices have remained elevated for 30 consecutive months, making it the only category to move in lockstep with the Consumer Price Index on a long-term basis.

This is in part due to pet ownership surging during the pandemic, while demand for related goods remains high.

Even with some categories seeing price drops, it will take time before inflation returns to a normal level, CNN reported.

Inflation reached 9.1 percent year-over-year in June, the biggest increase since November 1981. A new report due on Aug. 10 is expected to show inflation dipping slightly to 8.7 percent in July.

The new figures may be a sign that price pressures, which have hurt millions of consumers and increased fears of a recession, are easing, but the reason for the price drops may be bad for retailers.

Big-box retailers such as Walmart Inc., Target Corp., and Best Buy Co. Inc., are all dealing with a major glut in store inventory that’s been eating into their revenue, prompting a major slash in store prices, according to CNN.

“Wavering consumer confidence and a pullback in spending, coupled with oversupply for some retailers, is driving prices down in major online categories like electronics and apparel,” said Patrick Brown, Adobe’s vice president of growth marketing and insights, in the Adobe news release.

“It provides a bit of relief for consumers, as the cost of food continues to rise both online and in stores,” Brown stated.