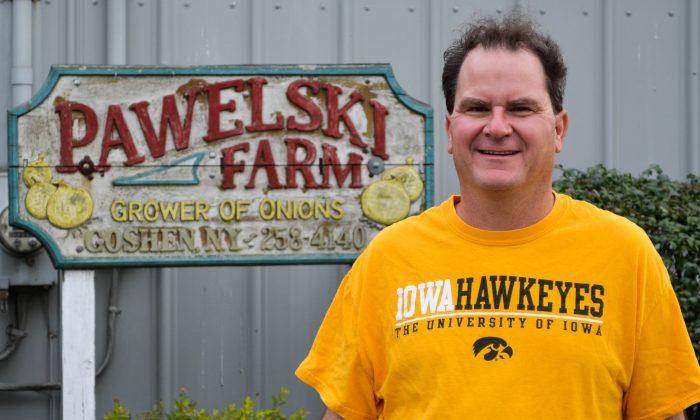 Onion and Apple Growers Bring their Produce to Market

GOSHEN—Apple and onion growers are working to bring in two of Orange County’s biggest cash crops. After uneven weather during the growing season, onions growers are reporting an average yield, while apple growers say this year is “excellent.”

Chris Pawelski farms with his father and younger brother. They had a late start with frozen ground, followed by months of heat and drought. Onions can handle one peril, “but what they can’t handle at that period of time is multiple perils,” Pawelski said.

It really turned out to be an excellent harvest.
— Dan Donahue, Cornell Extension

Weather played a positive role for apple growers, said Cornell Extension Fruit Tree Specialist Dan Donahue. “It’s been a smooth harvest. Thankfully we’ve gotten the rain, but we’ve also had plenty of nice weather—you can’t pick apples in the rain—so that has helped us get a substantial crop off the trees and into the bins.”

Kelly Schaeffer, owner of Slate Hill Apple Orchards, said this was a good harvest. She bought the orchard last year and said the orchard had not been maintained the previous seven years. She grows several varieties—Red Delicious, Cortland, Crispin, Empire, and Rome—on about 20 acres using organic methods.

Chris Pawelski farms 117 acres of storage onions with his father and brother. Each has their own acreage but the Pawelskis work their acreage together. They transplant about 40 acres and direct seed the rest. About 60 percent of their fields go for yellow onions and 40 percent in red onions.

The apple that everyone wants is the Honeycrisp. “Honeycrisp apples are the most expensive and are going to stay that way for the foreseeable future,” Donahue said.

Honeycrisp apples were developed at the University of Minnesota in 1960. The apple variety is prized for its sweetness, firmness, and tartness. It has much larger cells than most apples, which rupture when bitten to fill the mouth with juice. The apple stores for up to four months in the refrigerator.

The Honeycrisp.com website run by the Wooley Family of Greenwich, NY, claims a reporter in Minnesota said, “The balance between sweet and tart utterly seduces your taste buds.”

Although New York apple growers compete for markets with the state of Washington, they sell much of their harvest in the United Kingdom. The State of Washington had a slightly smaller crop than New York this year, but the price is holding. “It’s overall nationally a smaller crop from last year,” Donahue said.

The popularity of Honeycrisp keeps the price high but it is difficult to grow. Growers can’t count on the same yield from year to year, which in apple growers’ jargon is known as biennial bearing. In the “on” year too much fruit is set, leading to small fruit size, and the subsequent year will be the “off” year, with too little fruit.

Pawelski says supermarkets make money on his onions. “We are now getting 18 cents a pound. At ShopRite, they are getting $1 a pound. The repacker makes a couple cents a pound. Trucking a half cent. The rest is the chain.”

When the supermarket chains buy wholesale, they want the onions to be good quality and as cheap as possible. “They are the ones driving things down,” Pawelski said. “If they really supported the local farmer, they would see to it that the price would be a fair price.”

Pawelski said his onions are full-flavored and credits the black dirt of Orange County. “Our soil is the perfect soil for pungent full flavor onions that have very high sugar content, so they are absolutely the best onions for cooking.”

Pawelski can’t explain why the price has stayed low with the average harvest. “It’s not what it should be.” Pawelski said the price he gets for his crop has not changed much since he was a senior in high school. “We sold yellow onions in 1983 for $6 a bag and I’m getting $9 now.” He would like to get $14 a bag.

Pawelski said growers upstate get even less. All that is saving New York onion growers is the cost of freight for growers in western states. “The freight now is about $6 a bag just to transport the onions.” The price for yellow onions should not drop below $12, he said.

New York State accounts for 97 percent of onion production in the northeast and brings in approximately $52 million. Pawelski said he hopes to make some money but still has outstanding loans from years of weather disasters. “I’m carrying between $400,000 to 500,000 in debt with the USDA.”

New York State accounts for 97 percent of onion production in the northeast.

In 2011 he was able to harvest only three out of 51 acres after Hurricane Irene leveled crops in Orange County. With $150,000 in bills, Pawelski got creative. He placed a bag of onions for sale on eBay asking $150,000.

People responded. “People saw it and some wanted to send us money. I ended up selling onion seeds for $10. We were crying, the outpouring was so genuine.”

Last season was better than average for the onion crop after years of weather disasters going back to 1996. That ended in 2014, which Pawelski said was “an absolute, fantastic perfect year.”

Donahue said final revenue figures have not come in for this harvest, but the grower doesn’t make much. “The apple grower gets a fraction of the retail price. It varies by the variety and the bushel, and the quality of the fruit. It’s a little early for that data.”

Overall, the apple harvest has been excellent because of rain that came late in the season. “That helped put some size on the apples. So it really turned out to be an excellent harvest.”