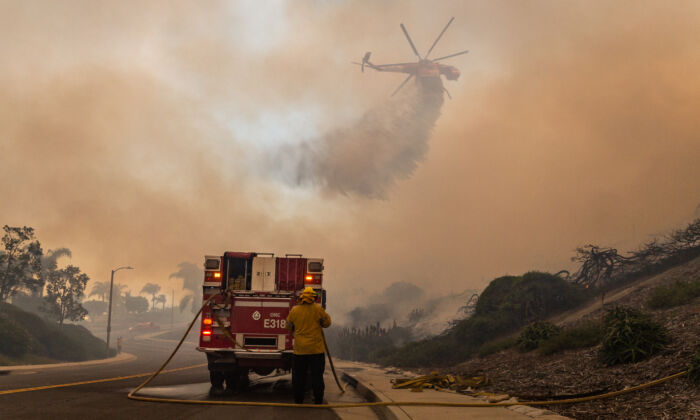 John Fredricks
John Fredricks is a California-based journalist for The Epoch Times. His reportage and photojournalism features have been published in a variety of award-winning publications around the world.
View profile
Follow
and Brandon Drey

“This is a mandatory evacuation; all residents must leave, now,” an Orange County Sheriff’s deputy shouted over an intercom from his cruiser as firefighting vehicles drove past.

The middle-aged woman complied with the officers and started up her SUV. Trash cans lay scattered from high winds in front of the homes of her neighborhood of Niguel Summit.

Just on the street above, large plumes of smoke and flames scattered down the shrubbery of a hillside while Orange County Fire Authority firefighters shot a powerful line of water into a burning home.

A piece of the home, already destroyed, then collapsed onto the driveway creating a sharp tumbling noise and a wave of ash that flew toward the fire engine.

The flames spread quickly as they tore through thick brush on the hillside, aided by ocean winds that sparked spot fires ahead of the main blaze.

The fire pushed its way uphill, advancing on Aliso Summit Trail and into the neighboring multimillion-dollar estates.

Orange County Fire Authority Chief Brian Fennessy said at a Wednesday night news conference that an estimated 20-plus homes had been destroyed.

There were no immediate reports of injuries.

Evacuations were ordered in the Coronado Pointe and Pacific Island Drive areas, while voluntary evacuation orders were issued in the Balboa Nyes and Moulton Meadows neighborhoods in Laguna Beach. Students taking part in after-school activities at Laguna Beach High School were also evacuated, according to the school district.

Residents of the evacuated neighborhood were given access to Crown Valley Community Center, just a few miles from where evacuation orders were announced.

Around 6:30 p.m. Wednesday, approximately 25 residents fled to the emergency operation center provided by the city, where city staff welcomed those seeking shelter and offered donated food and water.

Inside the shelter that can hold up to 200 evacuees, families gathered in small groups, comforting one another, while they watched the fire blaze through nearby neighborhoods on local news channels.

Tim White, a Laguna Niguel resident, said he and his wife were working from home when they heard planes fly overhead in the Monarch Summit neighborhood—an area south of where the flames initially erupted.

“We walked down our street and could see the flames coming,” White told The Epoch Times. “There’s a lot of elderly that live around us, so we talked to a couple of them and told them it was coming.”

White, along with his wife and daughter, said although they believe their home is safe, they were still “nervous” and “worried.”

“We’re hanging out here until we get an ‘all clear,’” White said while staring at the inferno from the vantage point of a helicopter camera during a live broadcast. “So, fingers crossed.”

The flames advanced even as fixed-wing planes dropped fire retardant on the hillside in hopes of slowing the advance of the flames. Several water-dropping helicopters were also being employed in the firefight.

Above the firefighters, a constant flow of firefighting aircraft dropped water over burn areas, coming within feet of the ground crews.

“I have not been ‘baptized’ by a water drop just yet,” an Orange County Fire Authority photographer told The Epoch Times as a plane flew past. “It’s really only a matter of time, though.”

As he moved to the higher ground toward the direction of a burning home, additional firefighting units in a row of engines moved towards a wave of smoke, slowly disappearing with the bright lights of the engines lighting up the clouds.