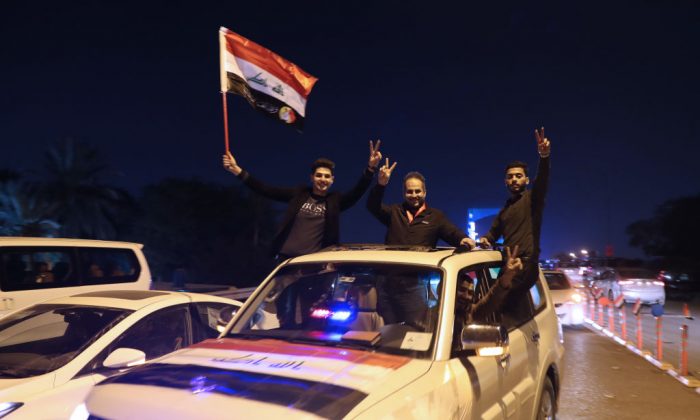 Iraqis celebrate the re-opening of the Green Zone, home to government buildings and Western embassies, on Dec. 10, 2018 in the capital Baghdad. (Ahmad Al-Rubaye/AFP/Getty Images)
Middle East

One Year On, Baghdad Falls Silent to Mark Defeat of ISIS

BAGHDAD—A hush descended on central Baghdad on Dec. 10 as Iraqis observed a minute’s silence for those killed in the battle against the ISIS terrorist group a year after the group was defeated.

Fireworks were scheduled to be set off later in the evening. The government has made the date a national holiday and dubbed it “victory day” but some Iraqis felt little cause for celebration, however.

Little meaningful reconstruction has taken place in cities decimated by battles against the jihadists between 2014 and 2017, and Iraq is in the throes of a new political crisis which has prevented it forming a government that can tackle widespread corruption and lack of jobs and services.

Meanwhile, ISIS are still carrying out insurgent-style attacks against security forces and have been blamed for car bombs and assassinations of local notables.

“Iraqis are scared that the problems in parliament … and the inability to form a full cabinet … have helped create the (unstable) environment for Islamic State cells to re-emerge,” Najah Jameel, 48 a civil society activist, said.

Another Baghdad resident, Dawood Salman, 55, said he would remember the soldiers and fighters who were killed battling the jihadi.

“We congratulate the military and the Popular Mobilisation Forces,” a grouping of mostly Shi’ite paramilitaries, he said.

Iraq’s military, Kurdish forces and the Shi’ite militias backed by U.S.-led air strikes and special forces drove ISIS out of areas they had controlled for three years in 2017.

Former prime minister Haider al-Abadi declared the Sunni Muslim extremists defeated in Iraq on Dec. 9, 2017. The group had ruled over a self-styled caliphate, governing large parts of northern Iraq and eastern Syria according to its fanatical interpretation of Islam and Islamic law.

“This is a day that we are all proud of, when our courageous country defeat the enemies of peace,” Prime Minister Adel Abdul Mahdi said in a televised address.